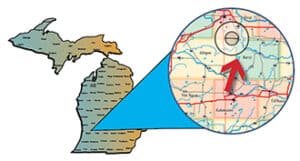 Bass, pike perch, black crappie and bluegill populations are healthy in Gun. Stocking and limited natural reproduction has resulted in a decent walleye fishery, too, which is rare in this part of the state.

Resting along the western edge of Barry County, west of Hastings and adjacent to the Yankee Springs State Recreation Area, Gun Lake offers 2,680 acres of surface water. This large, spring-fed lake has a maximum depth of 68 feet. It features 17.8 miles of shoreline and 1.4 miles of shoreline in islands.

The lake has an irregular shape and two separate basins, one to the east and one to the west.

The west basin is shallow with a maximum depth of 5 feet throughout with the exception of Robin’s Bay (34 feet) at the north end, and Pickerel Cove (25 feet) at the south end.

The east basin is riddled with contours, breaklines, humps, points and islands. There are several deep holes in the east basin with the deepest reaching 68 feet.

Gun Lake has numerous inlets, including one from Hall Lake, which feeds three walleye rearing ponds on the east shore. The outlet is the Gun River, a designated trout stream for most of its length.

If you’re looking for a fish of Master Angler proportions, Gun Lake has plenty. No less than 30 fish meeting Master Angler standards have been caught in Gun Lake in the last five years. They include 11 longnose gar, seven black crappies, three pumpkinseed sunfish, three bowfin, and one each bluegill, rock bass, common carp, warmouth, bullhead and freshwater drum.

Gun has a long history of stocking by fisheries managers that dates back to 1873 when Atlantic salmon were planted. Over the years, American eel, yellow perch, bluegill, largemouth and smallmouth bass, muskie and walleye have been stocked in the lake.

The DNR conducted two surveys of the fishery in Gun Lake in 2015. According to Diana’s report, 17,582 fish were collected representing 32 species of fish and minnows.

Bluegill was the most abundant game fish found in the survey. The ‘gills ranged up to 9 inches and averaged 6.2. There were good numbers of black crappies, averaging 10.5 inches and ranging up to 13.

Bass, pike and walleye are the main game fish predators in Gun Lake. The surveys produced good numbers of each.

“Walleye fishing opportunities are limited in southwest Michigan and Gun Lake provides one of the premiere walleye fisheries for this part of the state and is one of the largest lakes in the area,” Diana wrote.

Light numbers of smallmouth bass also were captured. They averaged 15 inches and ranged up to 18.

“The overarching management goal for Gun Lake is to maintain a diverse fishery,” Diana wrote. “This can be accomplished through continuing to stock walleye and promote largemouth bass, yellow perch, and bluegill fisheries. Efforts should be made to enhance habitat by promoting vegetation and woody habitat in the lake. In addition increased connectivity between Gun Lake and streams that feed and flow from the lake should allow fish passage and promote natural recruitment.”

For walleyes, try drifting or slow-trolling nightcrawlers in 18 to 24 feet of water off Murphy’s Point and over the sunken island north of Hasting’s Point. Leeches and minnows will also catch fish.

Summer anglers do well on pike by fishing shiners and suckers under a bobber on the large weedy flat between the  park and Bairds Cove.

Bass are caught throughout the lake. The west bay is shallow and early in the season they’ll stack up in the grass clumps. Anglers who drag bottom with crayfish imitators or cast crankbaits report good action.

As summer moves in the bass move deeper. Try casting tube baits or Rapalas in Robin’s Bay, at Turtle Rock and in Pickerel Cove.