Heading to Camp in Crow Wing County? Maybe stay a while 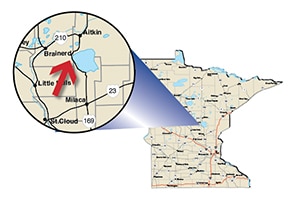 Camp Lake is located in southeast Crow Wing County, not far from the shores of Lake Mille Lacs. It’s primarily a crappie/largemouth bass fishery that does produce a quality northern pike every now and again.

Walleyes are limited – almost nonexistent – in this 533-acre lake. But if the wind is blowing, possibly preventing you from getting on mighty Mille Lacs, and you’re hell-bent on wetting a line and catching some panfish or bass, Camp could be a good option.

It’s one of those lakes that you need to approach with a different mindset than you’re probably used to. Don’t go there hoping to land magnum-sized panfish or giant bass. Rather, temper your expectations, catch some fish for the frying pan, and simply take what Camp has to offer.

“It’s a good enough lake to fish for a meal of crappies and sunfish,” said Wayne Peterson, of Tutt’s Bait and Tackle in nearby Garrison. “The locals fish it at times, but Camp doesn’t get a lot of (fishing) pressure.”

The majority of crappies you’ll find there are in the 8- to 9-inch class, with some up to 10 and 11 inches in length. Peterson said he once pulled a crappie from Camp that measured around 14 inches, but acknowledged that specimen was probably a fluke.

Camp’s crappie population benefits from quality spawning habitat around the lake, especially its west arm, which holds some notable stretches of wild rice.

Generally, the northwest bay produces crappies in the spring, as do the 12- to 15-foot weed tops during the summer. The fall and winter months usually find pods of crappies suspended over deep holes out from the public access.

According to Carl Mills, DNR fisheries specialist in Brainerd, the lake hasn’t been surveyed since 2014. At that time, 50% of the crappies sampled were right around 8 inches long and just one of them measured over 10 inches.

“Not much has changed out there over the years. Most of the crappies are 8 inches in length,” Mills said. “The trend has always been 7- to 9-inch fish, but every once in a while you’ll catch one that’s a bit larger.”

Bluegill abundance is pretty high, but like the crappie population, these are not bragging-size fish. Again, expect to put together a batch of fish for the table, which shouldn’t be that difficult.

For the most part, you’ll catch bluegills in the 61⁄2- to 7-inch range. For what it’s worth, the 2014 DNR survey yielded a handful of fish between 8 and 9 inches in length, and that should be the expectation currently as well.

“You can put together a decent meal of sunfish in a couple hours of fishing,” Peterson said.

The current status of the largemouth bass population is one of fair size and numbers. Expect quite a few fish in the 13- to 15-inch range, but bass over 17 inches are caught regularly.

From an angling standpoint, there are enough quality bass in Camp to give it a fair shake. There also are plenty of areas with vegetation above and below the surface that hold fish.

“It has decent numbers and size (of bass) for this area,” Mills said. “I wouldn’t say it’s outstanding bass fishing, but decent.”

There is the potential to pull a respectable northern pike from the coontail edges throughout Camp. Catching fish for the table or pickling jar shouldn’t be a problem.

While you can expect the majority of pike to run between 22 and 26 inches in length, fish around 30 inches or slightly above that mark are caught from time to time.

“There are some decent pike out there,” Mills said. “I’d say better-than-average size than many lakes in this area.”