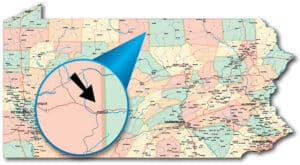 State Game Land 64 is at the center of a large complex of public land with much to offer sportsmen.

Divided into two parcels, both near Route 6, the tract is located north of Galeton. State Game Land 64 was acquired in the early 1930s and was the Game Commission’s 39th game lands purchase. The two combined parcels of the game land have four miles of roads.

Numerous parking lots, most of which are located on Meeker and Clark Farm roads, are available. Ansley Road crosses portions of this game land, and meanders into Susquehannock State Forest and eventually into State Game Land 208 in Tioga County.

The topography of this parcel, as with most of its environs, is towering mountains separated by deep ravines and gorges. At this game land’s highest peak, which approaches 2,500 feet, was the site where an active fire tower was once located.

There are about 85 acres that are mowed, planted with annual grasses and planted with turnips and varied beneficial wildlife grains, according to Denise Mitcheltree, land manager supervisor.

With the deer herd now expanded throughout the state, combined with a Game Commission major deer-population-reduction in Potter County, few would dispute that fewer sportsmen are utilizing their camps during the deer season.

Other outdoor recreational activities dictate four-season camp utilization. With most of the 264,000 acres that make up the Susquehannock State Forest in Potter County, “deer camp” members are utilizing the state forest’s multi-use trails which includes opportunities for ATV enthusiasts and snowmobilers.

The topography and wildlife management practices dictate that turkey-, deer-, bear- and squirrel-hunting opportunities are consistent with other public lands in this area. Few grouse are reported harvested.

Bristol Swamp is a 15-acre impoundment that is near the northern border of the larger section of this game land and is located near the top of the plateau. Primarily during the fall duck migration period, this wetland affords some duck-hunting opportunities.

Because of its northern location, winter snow cover is typically present, and with an abundant number of hunting camps located in the vicinity, coyote and fox calling continues to be a popular pastime.

Lyman Run, located seven miles west of Galeton, is 595 acres and offers a 45-acre lake. An approved swimming area is available. Additionally, trout are stocked in Lyman Run as well as Lyman Lake.

Cherry Springs State Park is also located near Galeton and has become legendary because of the numbers of “star gazers” visiting this site.

Some members of local camps located in proximity to State Game Land 64 use their facilities as convenient “ski lodges.”

It is also the site of a commercial skiing operation that offers well-groomed slopes and cleared cross country ski trails. The ski-facility is commercial and with nearby rental cabins being available, this park is becoming a four-season destination.

Potter County is also known for its trout-fishing opportunities. A total of 24 streams, rivers, lakes and impoundments are stocked by the Fish & Boat Commission.

State Game Land 64 and its environs are the location of the headwaters of Pine Creek, where Ninemile Run and Genesee Forks merge. Phoenix Creek is known to be an exceptional high-quality stream and Dodge Run, and Johnson Brook, as well as several other tributaries, adds to the quality of this tract.

As with most public lands, game land 64 has a designated route for those issued a disabled person’s permit. This trail begins approximately six miles west of Galeton. To find it, turn south onto Rock Run Road (Susquehannock State Forest,) travel on Rock Run Road for 3.7 miles and turn east on an unnamed dirt road.

SPECIES: There are opportunities for hunting turkeys, deer, bears and squirrels.

WHAT YOU SHOULD KNOW: There are duck hunting opportunities at Bristol Swamp, a 15-acre impoundment near the northern border.

Known for its trout fishing, Potter County has 24 lakes, streams, rivers and impoundments stocked by the PF&BC.