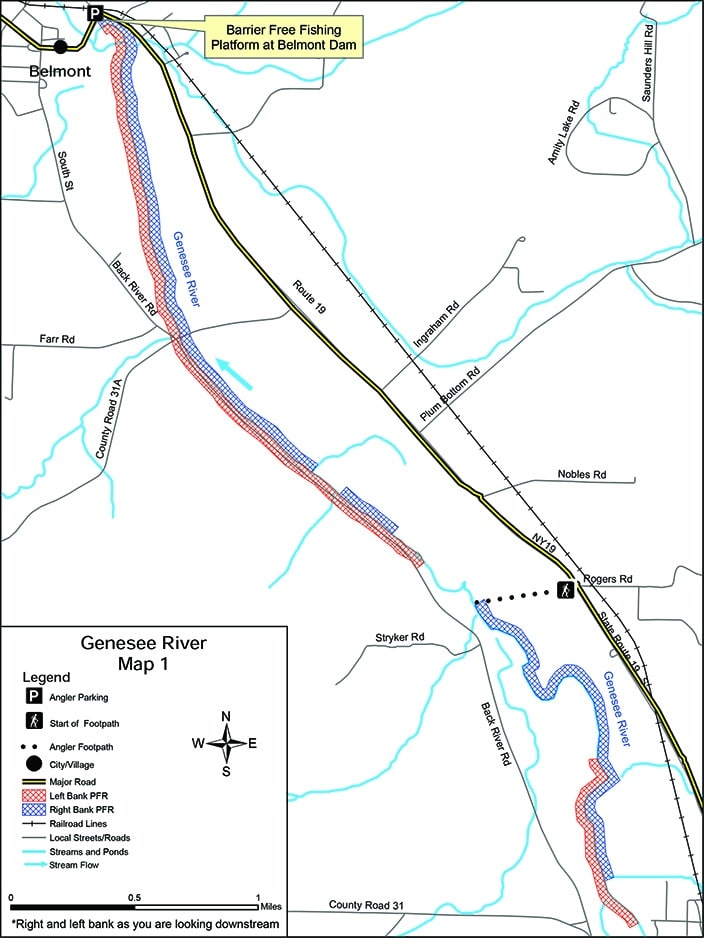 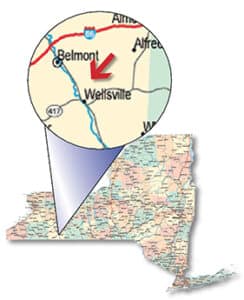 Anglers plying the waters of the Genesee River should have no problem finding a slice of water all their own.

With 18 miles of Public Fishing Rights secured by the DEC over the years, and 19 miles of the river managed as a stocked trout fishery, there’s plenty of room for everyone.

And plenty of trout, too.

DEC’s trout stocking program typically calls for over 26,000 browns and rainbows to be planted in the river, notably in the upper 19 miles of the river from the Pennsylvania state line downstream to Belmont. Included in that number is about 2,300 2-year-old browns of 12-14 inches.

The section from the state line to Wellsville is also stocked in the fall with varying numbers of surplus brood stock brown and rainbow trout. And if that’s not enough, throughout the river is a solid population of smallmouth bass.

Portions of the river flow through Letchworth State Park, a hugely popular destination for campers and hikers.

“From the state line to Belmont, the Genesee River is managed with a year-round fishing season for trout, with no special creel or lure restrictions,” DEC officials wrote in a technical brief that includes information from participating angler diarists. “However, there is a 2.5-mile section managed for trout with year-round catch-and-release, artificial lures-only regulations.”

DEC has in the past had difficulty getting a true measure of the trout fishery due to the size of the river. With average widths of 40-70 feet, with deep pools and woody debris jams, it makes for a tough electrofishing effort.

“Past electrofishing surveys have shown very low catch efficiencies and are not believed to offer true representations of the trout populations in the river,” officials said, noting that other options are being explored. “While angler-contact surveys work well to estimate use and catch rates, they are extremely costly and time-consuming to complete.”

As a result, DEC Region 9 fisheries personnel are relying on angler diary programs to get a handle on the fishing quality, with programs covering the entire stocked trout section completed in 1988, 1989, 2010, 2014 and again in 2017.

“The combined catch rate in 2017 (1.22 fish/hour (±0.13)) was very similar to 1988, 2010 and 2014 diary programs (Figure 1), and was considerably higher than the catch rate objective for stocked trout streams (0.5 fish/hour),” the diary report noted. “Catch rates stayed high throughout the summer months into the fall, indicating reasonable survival of stocked trout in this stream.”

Fifty-eight trips were recorded by diarists targeting bass in 2017. Those anglers reported catching 268 smallmouth bass, all of which were released. The diarist catch rate for bass in 2017 (2.06 fish/hour (±0.32)) was “exceptionally high and very similar to 2014, but considerably higher than 2010,” the report indicated.

The average length reported for smallmouth bass caught was 8.8 inches, with 24% of the fish reported to be over 12 inches and nine fish topping 16 inches.

“Based on generally high and stable diarist catch rates from 2010-2017, it appears that the Genesee River in DEC Region 9 continues to provide a quality fishery for both stocked trout and wild smallmouth bass, for at least one segment of the anglers using the river,” the report read.

There are accessible fishing platforms located on the river in the Village of Wellsville at Island Park and at the Belmont Dam.

It’s not difficult to locate the Genesee River. Take Route 17/86 to Angelica in western New York, then head south on Route 19 toward Belmont and Wellsville. The stocked section and Public Fishing Rights begin in Belmont, and the river generally follows Route 19 south toward the Pennsylvania state line.

(Editor’s note: DEC is looking for more participating anglers in the diary program for the Genesee River. The program aims to record data for trout and bass fishing trips on the Genesee River from the Pennsylvania line downstream through Letchworth State Park between March 1 and Oct. 31.

Anglers who fish the Genesee River (even once) and would like to contribute observations by keeping a fishing diary for DEC can contact DEC’s Region 9 fisheries office at (716) 379-6379 or by email at fwfish9@dec.ny.gov.)