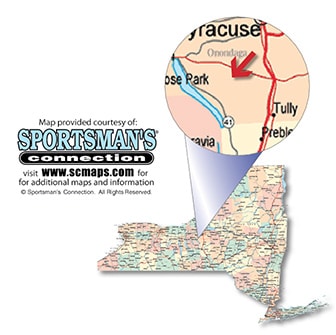 And it’s probably not known as the best of the Fingers in terms of fishing, although that debate may rage depending on the time of year, or even the year.

But Otisco Lake, the easternmost of the 11 Finger Lakes, located between Auburn and Syracuse in central New York, has several things going for it when it comes to fine fishing.

It’s perhaps the best spot in the state to go for tiger muskies, that muskellunge-northern pike hybrid stocked by the DEC only to seemingly disappear in many waters. Otisco has a solid reputation for producing tigers, and often big tigers, during both the open-water and ice fishing seasons.

Panfish action can be fast and furious, notably at the lake’s northern end. Bass fishing is rock solid, especially for largemouths. Brown trout are stocked annually by the Carpenter’s Brook Fish Hatchery and are regularly caught by springtime trollers.

And the lake’s walleye fishery is attracting anglers in the spring, early summer and again in the fall. A 2018 summer gill net survey by DEC regional fisheries staff showed good numbers of walleye and evidence of natural reproduction to supplement DEC stocking efforts.

“The survey catch rate of 11.6 walleye per net is well above the 5/net that would suggest a high abundance (of walleye),” DEC fisheries biologist Jim Everard wrote in his report on the survey. “Lengths ranged from 8.4 to 25.7 inches, with a mean length of 18.8 inches. Walleye were in very good condition… ages ranged from 1 to 16, with age-3 being most frequently represented.”

Several different year classes of walleye were seen, “notably from 2007, 2014, and 2016 year-classes (ages 11, 4, and 2, respectively) which, if aged correctly, were non-stocking years and thus would be wild fish,” Everard wrote.

That’s the good news on walleye. But DEC fisheries staff remain concerned that the presence of a solid alewife population in Otisco may still pose a problem. Alewives have historically hindered natural walleye reproduction as they prey on walleye fry.

“Factors that allowed for improved survival (of walleye) in the years mentioned previously are unknown but could include greatly reduced alewife populations and/or unfavorable water conditions south of the causeway, such as low temperatures or especially high turbidity,” the report stated. “Given this finding we will conduct fall Young of the Year walleye assessments in non-stocking years to better determine the frequency and extent of wild-produced walleye in Otisco Lake.”

Otisco Lake is managed under Finger Lakes regulations, with a tiger muskie season running from the first Saturday in May through March 15, with a one-fish daily limit and 36-inch size minimum. For trout, the season runs all year, with a daily limit of five fish and a minimum size of 12 inches.

Walleye anglers often score well in the fall by casting from shore, or from the causeway, after dark. Tiger muskies are most often encountered in the weedbeds at the north and south ends. The north end of the lake usually freezes over most winters and offers a good ice fishing destination for bluegills and pumpkinseeds.

Onondaga County has a park located on the east side, near the north end of the lake, adjacent to Turtle Bay. The park provides access for shore and ice fishing, and for launching of cartop boats. Ice fishing and shore access is also found along the east side at the north end, but no formal parking area exists. There are two private marinas with launches located on the east side of the lake – one on either side of the causeway – which provide trailered boat access for a fee.

You can get to the north end of Otisco Lake by taking Route 20 east out of Skaneateles, then heading south on Route 174 into Marietta. The south end of the lake via Route 113 (West Valley Road).