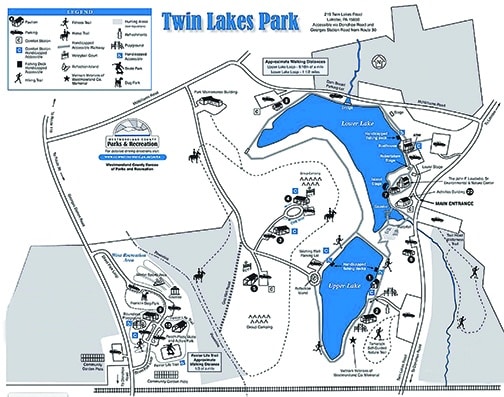 It’s hard to think of Twin Lakes Park as a hidden gem.

After all, it is by far the busiest park in the Westmoreland County-owned system. And crowds are growing along with its amenities.

For years the park – located near the county seat of Greensburg – has drawn people seeking to walk the now-paved trail that surrounds its Upper and Lower lakes, utilize its playgrounds, visit its veterans memorials, picnic or attend one of its many concerts or the annual, and huge, Arts & Heritage Festival.

That’s as true now as ever. But these days, even more people have even more reason to stop by.

But amidst all that, the park also houses a secret of sorts. Namely, its ice fishing opportunities are, if anything, underutilized.

The lakes get lots of attention from fishermen otherwise, certainly.

Summertime attracts anglers, too, though not with the same intensity. Things are more steady than frenetic then.

By comparison, ice crowds don’t always measure up size-wise. Whether that’s because of inconsistent cold – plentiful some winters, not so much others – is hard to say.

But, when the ice cooperates, there’s some good to outstanding fishing available here.

Start with Lower Twin Lake. At 30 acres, it’s the larger of the two waters in the park and the more heavily fished.

It’s also home to a variety of species that can be caught through the ice.

For starters, the latest of its four annual trout stockings occurs in October. They hold over to provide good winter action.

Beyond that, Lower Twin is a very good largemouth bass lake. Fish & Boat Commission biologists electro-shocked the lake three consecutive springs – in 2017, 2018 and 2019 – to get a handle on its bass population. It was outstanding each time.

Biologists labeled all that “one of the highest catch rates in the state.”

The lake is about more than just numbers, though. Biologists also reported getting trophy-sized bass exceeding 20 inches and 5 pounds every year. One of those handled weighed 8 pounds.

“Crappie numbers were good, with some very large specimens up to 14 inches available to anglers,” reads a commission report from 2019.

While ones that big are the exception, desirable fish are actually pretty common. Sixty-eight percent of the white crappies handled in trap nets in 2019 exceeded 9 inches, while 59 percent of the blacks topped that mark.

That’s not all, though.

“Bluegill numbers and sizes were also good, with about a third of the bluegills over 7 inches and some nicer fish that were between 8 and 9 inches,” the commission report said.

Then there’s Upper Twin Lake. The smaller of the park’s two waters at 20 acres, it nonetheless is a pretty good fishery in its own right.

Like Lower Twin, it also gets stocked with adult trout in October. They are often found in the deepest, coldest portion of the lake, very near the dam.

But aside from that, according to commission surveys dating to 2018, the lake also holds plenty of other fish. Panfish are especially abundant, with “fair numbers of quality size fish” available.

As at Lower Twin, that starts with crappies. Both blacks and whites exist in the lake.

The whites represent the best chance to catch a real slab. In their survey, biologists handled white crappies up to 16 inches long. What’s more, 92 percent of all the whites they saw exceeded 9 inches.

By comparison, about 30 percent of the black crappies hit the 9-inch mark.

Upper Twin also holds yellow perch, with half of those handled by survey crews longer than 9 inches, and lots of bluegills. They tend to be small, however.

The upper lake also holds largemouth bass, and, as in the lower lake, they are superabundant. The catch in a 2017 survey was 450 per hour, according to biologist Mike Depew.

They tended to be smaller than their counterparts in the lower lake that year. But things are looking up on that front.

By the time of the 2018 survey, overall bass numbers had gone down, but only to 330 fish per hour. Yet the average size of the fish had gone up. Crews saw fish between 5 and 17 inches, with the number in the 15-inch range having increased.

They are still relatively rare, but for pure action, Upper Twin’s bass are certainly out there offering opportunity.

Oh, and one last thing?

Both lakes are home to large and growing populations of channel cats. Depew said those fish exhibit faster growth rates than their counterparts in any other western Pennsylvania water, with some already in the 27-inch range.

So if you want some wintertime fun, swap out your skateboard and hockey stick for an ice auger and tip-up the next time you visit Twin Lakes Park. There are fish waiting to be caught.

LOWER TWIN LAKE: At 30 acres, it is the larger of the two waters in the park and more heavily fished. It is stocked with trout four times over the year. In addition to trout, Lower Twin Lakes holds channel cats, panfish, bluegills and impressive largemouth bass.

UPPER TWIN LAKE: At 20 acres, this lake is a good fishery in his own right. It holds black and white crappies, yellow perch, bluegills, trout, largemouth bass and channel cats.

WHAT YOU SHOULD KNOW:
– The park draws people seeking to walk the paved trail that surrounds the lakes. There is a playground, veterans memorials, picnic areas and many concerts, not to forget the huge Arts & Heritage Festival.

For more information: Contact the Fish & Boat Commission’s Southwest Region Office in Somerset at 814-443-9841 or the Westmoreland Couny Parks Department at 724-830-3000.