Time afield with bird dog a memory worth making

They don’t call them man’s best friend for nothing. Anyone who’s ever hunted with a special four-legged companion understands the unique bond between master and subject — a relationship that goes beyond a working partnership – one that’s a little closer to love than loyalty and obedience.

That’s the kind of friendship I have with my bird dog Cali. For most of the year, she’s a family pet — tagging along for leashed stroller walks, playing with my son in the yard, waiting patiently for table scraps, and dare I say — sneaking into bed when no one’s looking. She’s every bit a part of the family and has been for nine years now. 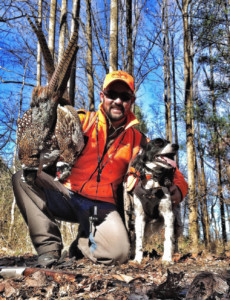 But come fall, our Springer-Setter mix transforms into a true blue hunting dog, and I get to reap the benefits.

The same sweet pup that gently rests her head on a lap for affection becomes a die-hard brush buster, unafraid to dive headfirst into the nastiest greenbrier and brambles, often trading blood for thorns, just to pursue the scent of a wary game bird.

It’s when I see her at her best — her happiest. She simply loves hunting.

The trembling and whimpering begins at the first glance of my hunting vest. As soon as I pull it from the storage bin, her nose buries in the back pouch, her tail wags swiftly, and she locks eyes with me. “Dad, are we really going?”

A few agonizingly slow and embellished moments later, her bell and e-collar are slipped onto her neck, the house door opens, and she immediately bolts to my truck to make sure I don’t leave without her. “Yes, we’re going hunting.”

We pull up to the State Game Land parking lot, I grab my over/under 12-guage from behind the seat and enable her e-collar. She knows we mean business now. The dog is released to the freedom of the wild, and she is overcome with joy.

A few quick bathroom stops to empty out the bowels, and the hunt is on. During the walk in on the trail, she zigzags back and forth before me, searching both sides of the cover, pausing every 30-40 seconds to visually check in before racing back to the thicket with nose to the ground.

As we approach the stocked field areas, her gait slows a bit. Some of the early energy has burned off, and she knows we’re about to get serious.

It has been several days since any birds were put out, and other hunters surely have probed these parts, but I have faith in the natural drive and abilities of my four-legged friend to pick up the scent of any remaining birds. She has proved herself worthy many times before.

I watch the physical cues of her body: an upward head tilt to catch the wind, a wagging tail before diving into switch grass, the speedy nose trail along a narrow footpath, then the pause by the thick cluster of cover. With tail swishing low, she repositions, and so do I — quickly — because time and experience have taught me to trust my dog.

Seconds later, an unseen but anticipated rooster explodes from the cover like a cackling rocket. I swing, mount and fire, folding the cockbird into a downward tumble, feathers floating in the wind.

“Good girl!” I yell, as we both rush to the mark of the downed bird. By the time I get there, she’s licking the pheasant. I pick it up and she sprawls out proudly. Words of praise and hearty hand strokes are showered upon her.

I swear I see a smile on her face that matches my own. I pour some water. She laps it up quickly and wants to get back to business.

We cover more ground. One rooster flushes the wrong direction, and I don’t fire a shot. Cali looks at me like I’m crazy, I apologize, and we press on — not lucking into any additional pheasants.

Just before departing, however, we check one more little island of brush I initially called her off during our walk in. I should’ve known better.

The tail foretells the flush. A rooster climbs in altitude. My near shot is a miss, but my second shot matches the bird’s speed, and the cockbird drops as the scent of barrel smoke dissipates in the air.

More praises and smiles are shared between man and beast. It’s a good day in the field and a great day for making memories. The limited brace of birds is a bonus.

My bird dog isn’t purebred. She doesn’t point, though I probably could’ve trained her to do so. She doesn’t retrieve, but she finds the downed birds. She doesn’t always mind her manners. She barks when the neighbors drive by, and sometimes she sneaks food from the table. But to me, she’s perfect in every way.

She hunts hard, hunts close, and puts up the birds — usually within range. She hunts as much for me as she does for herself. In turn, I hunt as much for her as I do for the tasty rewards. At the end of the day, our bond goes beyond master and subject. In the field, we are equals, best friends, family — and I wouldn’t have it any other way.