Marquette, Wis. — Will Lake Puckaway walleyes tagged this past fall be homebodies, sticking to the lake, or adventurers, exploring the Upper Fox River and spawning in habitat they haven’t been able to reach for more than a century?

A new Department of Natural Resources (DNR) study under way on the Upper Fox River aims to answer those questions and document if walleyes have changed where they migrate and spawn since fishways were added to the Montello dam in 2014 and Princeton dam in 2020.

It’s part of a constellation of studies helping build a better understanding of walleye behavior, habitat, and populations on the Upper Fox River and in the Winnebago System, said Adam Nickel, DNR senior fish biologist leading this newest study.

“We’re kind of coming into the first years where fish have the ability to potentially migrate to spawning habitat above the dams because of the fishways built at Montello and Princeton,” Nickel said. “The jury is still out a bit on the result of having the Upper Fox system passable now.”

The dams were originally built in the mid- to late-1800s, and fishways, or “ladders,” added as the dams were reconstructed in more recent years. The ladders are essentially side channels to the dams that allow fish to reach upstream waters.

The Upper Fox River flows northwest from its headwaters in Portage before curving and flowing to the north/northeast to Lake Winnebago, 110 river miles away. Many of the historical walleye spawning marshes are downstream of Princeton.

Evaluating walleye movement and habitat use can help guide habitat restoration efforts on the Upper Fox system to maintain and improve walleye populations, said Nickel, fish biologist for Green Lake, Marquette and Waushara counties. It can also help inform whether study lakes should be managed as part of the Upper Fox River system.

“Are fish part of the Upper Fox River system or homebodies to the lake?” Nickel asked. “If a lake is truly acting on its own, it may make sense to have regulations on its own.”

The DNR study began in October 2022 when Nickel and other DNR biologists implanted sonic tags in 16 adult walleyes in Lake Puckaway, which straddles Green Lake and Marquette counties. They hope to implant sonic tags in more Lake Puckaway walleye in 2023 when the team begins a comprehensive fisheries survey there. They also hope to expand the study to walleyes on Buffalo Lake.

All Lake Puckaway sonic-tagged walleyes will display an orange “loop” tag near the dorsal fin that means it also has a sonic tag in its body. Sonic tags can be reused by the DNR.

Sonic-tagged fish can be detected by a network of acoustic receivers attached to bridges along the Upper Fox River. When a fish swims within one quarter mile of a receiver, it records the fish’s identification number and the date and time it swam by.

As part of the study, the team has expanded the number of acoustic receivers so the network now runs from the mouth of the Upper Fox River at Lake Butte des Morts to Portage. The expansion was made possible by grants from the Natural Resource Damage Assessment resulting from the settlement paid by responsible parties that released polychlorinated biphenyls (PCBs) into the Lower Fox River and Green Bay.

Walleyes For Tomorrow (WFT) also is a partner in the study.

Members helped capture fish for tagging in 2022. The group is contributing funding, including offering a $100 reward for anglers who catch sonic-tagged fish and report tag information to the DNR.

Mike Arrowood, WFT board chair, is excited about the study.

Walleye populations are doing well, but the information will help achieve the group’s mission of increasing walleye production, in the face of high exploitation rates of female walleyes.

“These are the kind of studies we need to get definitive answers and raise important questions about the fish we have,” he said.

There is a good understanding of where fish living in Lake Winnebago move and spawn along the Wolf River because the DNR has done electrofishing and netting surveys for decades to help document such information. That information has helped guide WFT marsh restoration and maintenance projects to boost walleye production.

Walleyes in this study carry a cylindrical sonic tag (seen between the scissors) inside their body cavity. Photos courtesy of the Wisconsin DNR

“We don’t have a clue where they spawn on the Upper Fox,” Arrowood said.

Fish may be using ladders

There’s a lag from when fish passage is available and when fish discover a pathway is open to them. It may take years and generations of fish – or it could be happening more quickly, as some signs seem to indicate.

That suggests fish stocked in Puckaway had found a place to spawn even though those reaches had been off limits to them before.

Nathan Nye, DNR fish biologist for Columbia and Sauk counties, wondered if fish from the Upper Fox River might have contributed to the fair number of fall walleye fingerlings found in Swan Lake in fall 2014. The lake was not stocked that year and Swan Lake has no dam, so fish can come and go as they please from the lake.

“Whether they were Swan Lake resident fish that spawned successfully or fish from elsewhere in the Fox River system that migrated up to Swan Lake, or some combination of the two, was unclear at that time.”

His curiosity sparked, Nye decided to put floy tags in 583 walleyes to track their movements when the DNR conducted its regular comprehensive survey of Swan and Spring lakes in 2018.

Only one walleye was documented moving downriver from Swan Lake.

“Our population in Swan Lake appears to be almost totally composed of fish stocked in Swan Lake and a few escapees that pass downstream from Park Lake,” he said. 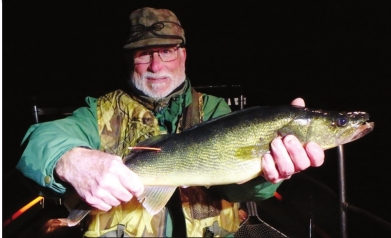 Volunteer Larry Loeffler holding a Lake Puckaway sonic-tagged walleye carrying an orange loop tag near the dorsal fin (right of his right hand). Anglers can earn a $100 reward for reporting these tagged fish to the Oshkosh DNR office. Photo courtesy of the Wisconsin DNR

Nye’s excited to follow the results of Nickel’s Puckaway and Buffalo lakes study. It’s more in depth and offers the ability to track fish over long stretches of river, all of which should better help unlock the secrets of walleye and sustain good fishing.

Sonic tagged fish from the Lake Puckaway and Lake Winnebago studies have an orange “loop” tag near the dorsal fin that reads, RESEARCH REWARD. Anglers who report the catch or harvest of a loop-tagged fish and have proper confirmation (the physical loop tag or picture with fish and verifiable loop tag number) will receive a $100 reward through Dec. 31, 2025.

Anglers who catch a sonic tagged fish are asked to record the tag number information and approximate length, take a picture with the fish, and a close up of both sides of the loop tag showing the number, and report the catch. If releasing the fish, leave the loop tag intact. If the fish is kept, contact the local DNR office. Fisheries personnel will retrieve the internal sonic tag, which has a three-year battery life and may be used again as the team catches more walleyes for the study.