Hamburg, Pa. — Hunters, anglers and all outdoors users might want to avoid concentrated areas of Japanese barberry, one of the most widespread invasive plants across Pennsylvania.

According to the Governor’s Invasive Species Council, “barberry is a prime example of the adverse effects of invasive species on public health.”

The council reports that it provides habitat for blacklegged ticks, which transmit Lyme disease, and research shows that it increases the survival rates of the ticks. 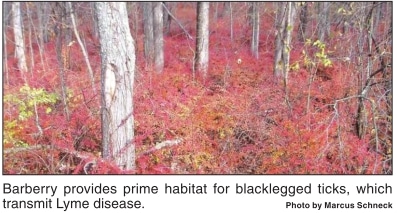 “Key factors are the increased temperature and humidity generated by the thick,
arching branches of the barberry shrub, which help ticks survive,” the
council says. “And the habitat the shrub provides to mice, rabbits and
birds that are hosts for the tick.”

Specifically, the white-footed mouse is a reservoir host for Lyme disease that uses
barberry as a habitat. The blacklegged tick can become infected after
feeding off the mouse, which can lead to the spread of Lyme disease.

Another study shows that management of barberry reduces contact between
blacklegged ticks and white-footed mice, resulting in the reduction of
Lyme disease infected ticks, the council stated.

Federal funding provided through the Department of Health is enabling DCNR
Bureau of Forestry and Bureau of State Parks staff to increase removal
of barberry in state parks and forests.

The funds also support education on tick safety for visitors to state parks
and personal protective equipment for staff to mitigate tick bites.

Barberry is an invasive species that can dominate deep in the woods and along
woodland edges. Because barberry tends to leaf out earlier than native
shrubs and deer don’t prefer it, it outcompetes native species.

It is spread far and wide across Pennsylvania because a range of birds eat
the profusion of berries produced annually by the plant and then spread
the seeds.

And barberry is ubiquitous because for years it was a top hedge plant in the
landscaping industry, with many homeowners disposing of trimmings from
the plant in nearby wild areas.

Barberry was added to the Pennsylvania Noxious Weed List in 2021. After a
two-year grace period, it may no longer be sold, distributed, cultivated
or propagated in the state.