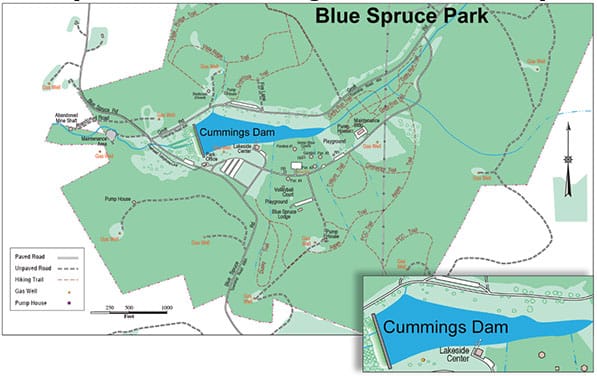 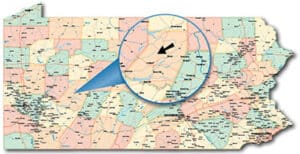 You’d be hard pressed to find many examples of heavy industry actually working to protect the environment in the early 20th century, especially in Pennsylvania.

But this would be one.

In the 1910s, when minimally regulated steel mills were fouling city skies, and mines were polluting streams, the owners of the Buffalo, Rochester and Pittsburgh Railway had a problem. They needed water to operate their steam engines. But much of what was available was tainted by acid-mine drainage.

The trouble was, that acid ate through locomotive boilers, shortening their lifespans. Repairing and replacing them was one of the railroad’s largest expenses.

So in 1908 the railroad bought land from J.D. Cummins in Indiana County and built Cummings Dam – also known as Blue Spruce Lake – on a tributary of Crooked Creek, to protect the watershed and ensure access to a clean water source. It enlarged the dam a few years later, in 1912.

That railroad is long gone, but the lake remains. And that’s great for anglers, as much at this time of year as any other.

The 13-acre lake – which, ironically enough, isn’t terribly fertile – is one of the main attractions of Blue Spruce Park, a 650-acre Indiana County-owned park officially created in 1966 and located just north of the town of Indiana.

It gets stocked with trout by the Pennsylvania Fish & Boat Commission twice a year: once in April, for opening day of trout season, and once in October, to provide angling throughout fall and winter. This autumn’s stocking took place on Oct. 19.

Trout can be caught throughout the lake, but the deeper water near the dam breast, closer to the park office, is generally good. There’s pretty good shore access in a lot of spots, though, so there’s room to spread out. That’s noteworthy since boating is prohibited.

The lake is managed as a stocked trout water open to year-round fishing, meaning anglers can keep three trout per day, provided they are at least 7 inches long, through Feb. 20. It’s catch and release only from there until opening day.

Trout aren’t the only fish to potentially keep anglers busy here, though. Relatively few may realize it – Cummings Dam doesn’t get a ton of angling pressure outside of stocking season – but there’s some other action to be had.

A survey of this lake, done in 2019, revealed 10 other species swimming here.

That survey – the first ever done of this fishery – found largemouth bass to be especially noteworthy. In only about 30 minutes time, biologist caught and captured 195 bass. To compare that to other lakes, that’s 390 bass per hour, an unusually high figure.

Biologists didn’t get any fish longer than 15 inches, but the park manager reported getting occasional word of fish that size and larger, so some surprises may await.

Like the trout, those bass can be caught throughout the lake. But, if you want to up the odds of getting into some, focus on the lake’s coves, located on the lake’s northern and southern sides.

Those hold near-shore weeds and grass that attract baitfish – the lake has a good forage base of bluntnose minnows and golden shiners – and ultimately bass.

Cummings Dam also holds a good many panfish, with bluegills the most common variety. But there are also a good number of yellow perch here, together with pumpkinseeds. There are also some – if very few – black and white crappies.

To be fair, few of any of those fish get very big, typically. Rare is the panfish longer than 7 inches. There are exceptions, of course. You might get a keeper yellow perch on occasion, but otherwise Cumming’s panfish are a case of quantity over quality.

But if you just want to feel a tug on your line, or take a child or newcomer out, those panfish provide some action in between bites by trout and bass.

Hunters, meanwhile, shouldn’t overlook this park. Large sections of the park – on all sides of the lake – are open to hunting. White-tailed deer are common, so they draw people. Others hunt squirrels here, too, and sometimes turkeys.

There are some park-specific rules hunters have to follow, though. Those relate to the terrain, land use and crowds.

There are a number of gas wells throughout the park, many in the sections open to hunting. A lot of people visit this park, meanwhile, to hike, cross country ski and bird watch.

The latter is an especially popular activity given that the park makes available a bird list identifying the species seen, at least on occasion, here.

As a result of all that, hunters in the park are limited to using shotguns, archery equipment and muzzleloaders. Centerfire and rimfire rifles and handguns are prohibited. No treestands or ATVs are allowed either, and hunters must hunt at least 50 feet from all trails.

That’s all OK. There’s plenty of room here for everyone, including hunters and anglers, and lots of opportunity to have fun, all because of some unusual history.

SIZE: The park is 650 acres; the lake encompasses 13 acres

WHAT YOU SHOULD KNOW: The lake gets stocked with trout twice a year by the Fish & Boat Commission, most recently Oct. 19.

Boating on Cummings Lake is prohibited.

The lake is managed as a stock trout water open to year-round fishing; anglers can keep three trout per day at least 7 inches through Feb. 20. After that it’s catch and release only until opening day.

Large sections of the park, on all sides of the lake, are open to hunting. Hunters in the park are limited to using shotguns, archery equipment and muzzleloaders.