Home » Illinois » Backyard and beyond: The surprises of autumn, and one magnificent moth

Backyard and beyond: The surprises of autumn, and one magnificent moth

Terry Lane was scouting ahead of Idaho’s elk season when he came upon several moose.

From the Backyard Val Cunningham

Lane, who retired and moved to Idaho several years ago, was wary, knowing how
protective females can be of their youngsters. However, a bull, a cow,
and a calf separately crossed the forest road ahead of him, without
mishap. He noted that these moose were the Shiras subspecies, the
smallest in North America (but males still average 1,000 pounds).

Dale Marfell sent a photo of a handsome insect I hope to avoid, called a
velvet ant. They’re really solitary wasps, and females (as in his photo)
are flightless. They live on, and in, the ground and feed on other
insects. Their sting is said to be excruciatingly painful, so they’re
nicknamed “cow killers,” although there are no reports of cows dying
from their venom. 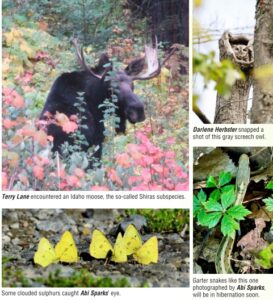 An unusually marked gray tree frog caught Don Dinndorf’s attention as it
rested on an ash tree leaf. “The camouflage would have been great on the
bark of a tree, but I suppose a leaf in a shady woods is close enough,”
Dinndorf said. “Sometimes the best fall color isn’t the leaves
themselves – it’s what’s on them.”

How many times have we walked beneath a screech owl, never knowing it was
there? Darlene Herbster said she was able to spot this little owl in a
tree hole because it was softly calling. She followed the sound and
spotted the owl when the sun peeked around a cloud.

Sandy Cooper braked quickly when she spotted a great horned owl in a roadside
ditch, possibly gripping prey, and Carol Shaffer caught a woolly bear
caterpillar on its way to a hibernation site. A closer look at Daven
Hanson’s osprey reveals that this hawk was varying its fish diet with a
frog, something I’ve never seen before.

Abi Sparks snapped a garter snake just before it headed into hibernation
and a quartet of clouded sulphur butterflies, while Mike Rix caught a
handsome white-throated sparrow, a mid-autumn migrant. 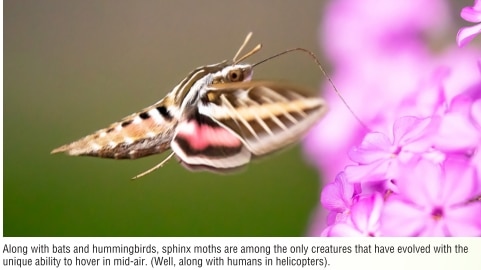 This fall brought an amazing insect to my flower garden – the white-lined sphinx moth (Hyles
lineata), also called the hawk moth or hummingbird moth. No matter what
name you use, this is a large, nectar-feeding moth that looks and acts
just like a hummingbird.

A unique insect found worldwide, there are more than 1,400 different
kinds of sphinx moths. The vast majority of them exist in tropical parts
of the world, but a few exist in the United States. The white-lined
sphinx moth is the most common and widespread of the hummingbird type
moths in North America. They live from Central America all the way up to
Canada and across most states.

So one evening this fall, I was standing in my perennial flower garden
surrounded by flowers, and noticed a white-lined sphinx moth moving from
flower to flower. It has a large, 2- to 3-inch wingspan, and hovers at
flowers just like a hummingbird. Typically, they emerge in late
afternoon with an hour or two of light remaining in the day. I ran to
grab a camera and lens to capture this amazing, winged beauty.

The sphinx moth combines its olfactory (smelling) and visual senses to find
flowers. Its eyes are sensitive to blue, green, and ultra-violet light.
Many flowers reflect UV light, which turns the flowers into beacons to
attract these insects. Although vision is a key sensory component, they
also have strong olfactory senses. They can smell (via their antenna)
different flower odors and follow the smell to locate new flower
patches.

When feeding, they approach the flower and hover in mid-air. This hovering capability
is unique and has evolved only in hummingbirds, a few bat species, and
these moths. The sphinx moth is one of the fastest-flying insects,
capable of flying more than 10 mph. While standing in my garden and
trying to capture some images, several times the moths were zipping
around me so fast I could barely see where they were going.

While hovering at a flower, this insect unfurls its long, straw-like mouth
part, called a proboscis. It expertly inserts the proboscis tip into the
corolla (tube) of the flower (where the nectar is located), and takes a
quick sip. It withdraws its mouth part, coils it up again, moves to the
next flower, and repeats. It will allow you to approach closely for a
good look at it while feeding.

While I was trying to snap some images of the sphinx moth, I noticed a
second, then third one hovering at the flowers. Soon I could see five
white-lined sphinx moths feeding at my flowers. They’re easily
identifiable by the white lines down their wings, and also they have six
distinct white stripes on their furry bodies. They also have large,
pink patches on their hind wings (they have four wings, two on each
side). Usually, you can’t see the pink patch unless you are
photographing and capturing the wings in an open position.

There are two distinct “flights” of sphinx moths each year. The first occurs
in late spring, and a second in late summer and early fall. The autumn
flight usually has many more moths. The adults usually don’t survive
winter. After mating, the females will lay eggs that hatch into large,
green caterpillars with a single horn protruding at the back. This is
why they are sometimes called horn-worms. The caterpillar stage of life
is well known for eating a lot. They feed on the green leaves of many
plant species. When it is ready to change (metamorphosis) into the adult
moth, the caterpillar digs a shallow burrow in the ground where it
stays for two to three weeks. When it’s ready to emerge as an adult, it
wiggles up through the soil just before transforming into the adult moth
and takes flight.

In many areas, they produce two generations per year, but in warmer
climates, they can produce three. They often fly in small groups, so if
you see one, there often are a few more around, and you just need to
look. This is an amazing insect, and I hope you get a chance to see one
for yourself. Until next time…