Changes, bass are both big at Newton 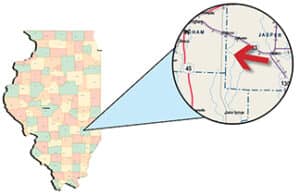 The largemouth bass population in Newton Lake is changing – mainly because the lake itself is going through a transformation.

Not that you would know it based on the bass caught during fishing tournaments last year. According to DNR data, the 62 tournaments held in 2021 resulted in 1,808 largemouths being weighed in.

The top five bass were all over 7.25 pounds, with the largest hitting the scale at 7.6 pounds.

But fisheries biologists are keeping a close eye on Newton, a cooling lake long considered one of the state’s top bass lakes.

“The size structure of the bass population collected in Newton Lake in 2021 was changed from past surveys,” DNR noted in a report following the 2021 survey of the lake. “A large portion on this change can be attributed to a strong class of 8- to 12-inch long bass. The percentage of adult bass greater than the 18-inch minimum length limit remained stable at 11% of the sample. Bass recruitment continues to be high, body condition is good, and growth rates remain at, or above, average. However, the fishery is slowly beginning to show signs of change.”

As mentioned, changes in the bass population is credited to the fact that the lake itself is changing. Declining operation of the coal fired power plant on the lake has significantly reduced the amount of hot water discharged.

“This has resulted in a reduced growing season, and a shorter spawning season for prey species, especially gizzard shad,” DNR explained. “In short, it is transitioning from a cooling lake to an ambient lake.”

DNR’s 2021 survey of the 1,750-acre Newton Lake led to predictions that anglers will catch large numbers of bass from 15 to 20 inches in length and ranging from 2 to 5 pounds. The majority of bass exceeding 18 inches will weigh between 3.5 to 7 pounds. Newton has a three fish daily limit and an 18-inch minimum length limit.

Some notes from DNR on other species in Newton Lake:

Channel catfish: The size structure of the channel catfish population has improved in recent years. Although still dominated by smaller fish, the population contains an adequate number of large fish to provide a good quality fishery. Approximately 93% of the adult channel catfish in the survey were at least 14 inches long and 31% exceeded 18 inches. High natural reproduction and recruitment in Newton Lake have historically produced large numbers of channel catfish annually, and sampling catch rates in 2021 remained high. The majority of the catfish caught will be 1 to 4 pounds, with some larger fish up to 5.5 pounds.

White bass: With few exceptions, white bass numbers have remained relatively constant. However, the electrofishing and netting catch rates increased in 2021. The population continues to exhibit good growth rates and body condition. Most fish will range from 13 to 15 inches, with larger fish up to 17 inches.

Growth rates were good and body condition remained above target. Despite the relatively low numbers, some anglers successfully target crappie each year and consistently catch limits.

The majority of the bluegill collected were less than 6 inches in length and no bluegill over 7.5 inches were collected. This lake is not recommended for avid  bluegill anglers.

It was constructed by Central Illinois Power Company in 1975, and was leased by DNR and opened for fishing in 1980.

It allows two-pole and line fishing only.

Newton Lake is closed to fishing during the seven days of the regular shotgun deer season.