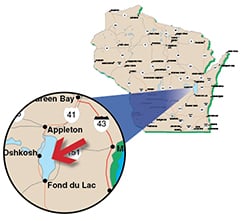 The DNR’s Lake Winnebago fisheries team has been conducting a bottom trawling survey every year since 1986 to establish and follow trends in the big lake’s fish community. The survey allows the team to compare year-class strength and adult abundance of game fish and forage species across 35 years of sampling.

The DNR team doesn’t do the trawling survey alone – each year volunteers donate more than 400 hours of labor to the project that samples 46 GPS waypoints during the first week of August, September and October. Each run involves towing a 27-foot wide trawl along the bottom for five minutes at 4 mph that covers about one acre. The trawl mostly catches young-of-the-year (YOY) and yearlings, but adult fish are also caught.

The team is currently working on the 2022 survey, but results of the 2021 survey are now available. A total of 96,997 YOY fish were sampled in 2021, making it the third-highest YOY count on record. In addition, 57,883 adult fish were captured, representing 23 species. The 2021 trawl survey highlights include above-average walleye and yellow perch year classes, the highest YOY sauger catch rate since 2010 and strong adult catches for yellow perch and bluegills. In addition, strong forage fish catch rates were found, including a record- setting YOY trout perch catch rate, strong adult emerald shiner catch and a measurable YOY freshwater drum year class.

During late March and early April, gauge height at the New London USGS site on the Wolf River fluctuated from 6 to 7 feet during spring electrofishing survey efforts. A minimum gauge height of 7 feet is needed to get the main New London and Shiocton marshes operating, with an 8-foot gauge height being more optimal, said Nickel. Although levels were lower in early April during the peak spawn, a small flood pulse in mid-April pushed gauge heights to 8 feet. Steady increasing water temperatures followed.

A total of 42 YOY saugers with a catch rate of 0.3 per trawl was recorded, the highest YOY sauger catch rate since 2009. Since the Sauger Rehabilitation Program ended in 2010, adult sauger numbers have decreased on Lake Winnebago and natural reproduction has been limited. The rehabilitation program included installing rock spawning reefs and stocking on Lake Winnebago from 2001-10. The goal was to enhance sauger spawning habitat and increase adult numbers to increase natural reproduction.

Although the project did increase adult sauger numbers from 0.2 per trawl in 2001 to 2.6 per trawl in 2009, natural reproduction continues to be limited, said Nickel. Catch rates for adult saugers have decreased to similar rates observed before the rehabilitation program began.

To improve the sauger situation, volunteers from Walleyes for Tomorrow led efforts for an experimental fry stocking project on the Upper Fox River from 2017-19 and 2021. Each spring, spawn is taken from ripe fish captured from Lake Winnebago, and fertilized eggs are transferred to a portable hatchery on the Upper Fox River in Berlin. Genetic samples were taken from all adults, allowing saugers captured during future years to be genetically tested to evaluate if they were from fry stockings or natural reproduction. In 2021, 58 saugers (42 YOY) were captured during trawling and 15 from spring netting, all less than 15 inches.