Walleyes reign on Lake of the Pines and Connors Lake

Connors Lake and Lake of the Pines (LoP) are neighboring waters located within the Flambeau River State Forest, about 17 miles east of Winter and 20 miles west of Phillips. Wisconsin’s twin cities of Loretta and Draper are about the same distance to the north. 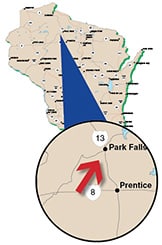 Because of their location in the state forest, Connors and LoP are popular destinations for anglers and hunters, since the DNR maintains state campgrounds on each lake. Connors Creek, a small navigable stream, flows from LoP into the north end of Connors Lake. From the south end of Connors the creek drains to the North Fork of the Flambeau River. Connors Creek is designated as a fish refuge between LoP and Connors. No fishing is allowed from April 1 to May 14.

Although the lakes are located in Sawyer County, the DNR fisheries team out of Park Falls (Price County) often joins forces with the Sawyer County crew to survey the lakes. The teams have spent a quite a bit of time running spring and fall surveys on the two lakes between 2012 and 2019, and that work will continue. Survey reports are available through the 2019 work.

Although the two lakes share nearly the same fish species, the fisheries are not exactly a mirror image of each other. While the lakes are similar in bottom substrate – mostly sand or gravel – water color differs. LoP had much darker water (5-foot average visibility) than Connors (13-foot average). That could lead anglers to believe daytime walleye fishing on LoP might be a tad easier than on Connors. This report will cover survey reports from Connors Lake.

Two netting and seven electrofishing surveys caught one to 19 largemouth bass. Of those surveys, the fall 2019 shocking sample had the most and the longest largemouth bass (20.2 inches). Fall shocking catch rates of 1.0 to 3.7 largemouths 8 inches or longer per mile of shoreline from 2014 through 2019 suggest abundance declined since 2005 (36 per mile of shoreline). Anglers caught 584 largemouths in 2,174 fishing hours, keeping 6.7% of their catch.

Historically, Connors has had few black crappies. The crew caught only two in fall fyke nets specifically set for crappies. Some anglers told the creel clerk that they fished for crappies in 2013-14, but caught none in 485 angler hours.

From early spring 2013 netting and shocking surveys the walleye population was estimated at 2.53 adults per acre, falling just short of the Flambeau River State Forest Lakes Fishery Management Plan’s goal to have three to five adults per acre. But, walleye size exceeded angler expectations – the plan calls for 25% to 35% of walleyes in spring fyke nets to be 15 inches or longer. Walleyes are sustained by natural recruitment with no record of stocking since fry and fingerlings were planted several times from 1933 to 1951.

Of note, electrofishing catches of spring-hatched walleyes per mile of shoreline in fall shocking surveys has shown a downward trend since the 1990s. Still, the population continues to produce year classes to replace the adults that die to angling and natural causes. From ring counts on cross-sectioned dorsal spines, it’s estimated that walleyes in Connors Lake grew at a rate near the average among populations in northern Wisconsin. Walleyes reached 14.3 inches after four growing seasons (range 12.3 to 18 inches) and 18.4 inches after six seasons. The abundant supply of small yellow perch is probably the main reason why the walleyes can grow at average and faster-than-average rates. Walleyes were the most sought-after fish in Connors, receiving 29.6% of the directed fishing effort.

The high catch rate and mediocre length distribution of muskie in early spring 2013 fyke nets closely matches those in lakes classified as A2 muskellunge waters, which offer fast action, but few big fish.

Muskies in Connors did not meet the size objective in the fishery management plan – that 10% to 20% of fyke net catches be 42 inches or longer. Connors has a long history of stocking dating to 1936. From 2000 through 2019, Connors received 10- to 12-inch muskies in alternate years.

All 851 fingerlings stocked into LoP since 2009 and all untagged muskies surveyed in both lakes since 2015 received coded PIT tags to identify each fish. Seven muskies tagged in LoP were recaptured 3.1 to 8.5 years later in Connors. One of those immigrants returned to its home lake. Only one muskie tagged in Connors was later found in Lake of the Pines.