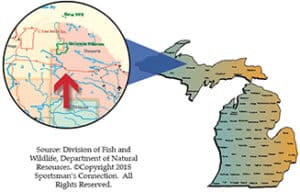 Reduced take and an increase in the minimum legal size limit on smallmouth bass and northern pike have paid dividends on Marquette County’s Fish Lake.

Back in the 1990s local anglers were growing concerned because it was getting increasingly difficult to catch legal-sized smallies and northerns in Fish Lake. Creel studies pointed to overharvest as one of the possible culprits driving the reduced sizes.

In an effort to appease anglers and, they hoped, create a better fishery, in 1995 the DNR imposed increased size limits and reduced possession limits on both species in Fish Lake. The minimum size limit for northern pike was increased from 24 to 30 inches and the minimum for smallmouth and largemouth bass was increased from 14 to 18 inches, although no largemouth bass were found in the lake during the most recent survey of the fishery. Two northern pike and one bass are allowed in the daily possession limit.

“The 30-inch minimum size limit on northern pike appears to have been effective as the average length of northern pike captured during fisheries surveys has increased since the regulation was implemented during the mid-1990s,” wrote DNR Fisheries Biologist Darren Kramer in a report following the most recent survey of the fishery in Fish Lake.

Pike caught during that survey averaged 25.7 inches and ranged up to 38.

The effect was equally impressive for smallmouth bass, with an average size being 17.8 in the survey. Smallies ranged up to 20 inches.

“Northern pike and smallmouth bass populations appear to still be adjusting to the increased minimum size limits implemented in 1995 as average lengths for each species have increased over the last two surveys,” Kramer wrote. “This is not surprising given that either species are fairly long-lived in Fish Lake. The high minimum size limits currently in place also appear to have been successful as larger and older fish constitute a greater proportion of each population as compared to before the regulations were in effect.”

Fish Lake is located about 14 miles west of the city of Ishpeming in west-central Marquette County. It features 156 acres of surface area and a maximum depth of 30 feet.

Fish Lake has an irregular shoreline with steep drop-offs along the north and east shores and more gradual breaks on the south and west ends. Seasonal and permanent homes surround the lake and much of the near-shore natural habitat has been removed to make way for private beaches and boat docks.

Halfway Creek, a tributary to the Middle Branch of the Escanaba River, drains Fish Lake to the east. Two small feeder creeks enter the lake on the western shore.

The bottom of the lake is composed of sand, cobble, and boulders near shore and organic material in the deeper water. Both emergent and submergent aquatic vegetation exists in the lake including cattails, lily pads, bulrush, and pond weed, according to Kramer’s report.

Access to Fish Lake is limited to a small public-access site located on the southeastern shore. The site has limited parking and features a gravel ramp suitable for small to mid-sized boats.

In 1988, manual removal of stunted yellow perch was undertaken. The walleye stocking program also was implemented that year to help keep the perch population from exploding again.

Spring fingerling walleyes have been stocked in the lake on a regular basis ever since including 5,100 fingerlings in 2016, 5,460 in 2019, and 10,444 in 2021. Combined with limited natural reproduction the walleye fishery is in good shape.

Good numbers of walleyes were collected in the survey and 35% of them were 15 inches or longer, which is the legal minimum size limit. They averaged 14 inches and ranged up to 21.

“Growth rates of walleye are currently under the state average, but when considering that walleye in the Upper Peninsula tend to grow slower as compared to the rest of the state, current growth is not as poor as it may appear,” Kramer wrote. “Walleye stocking rates in Fish Lake are fairly aggressive as compared to other lakes in the central Upper Peninsula…”

The survey nets also captured black crappies to 13 inches, bluegills to 9, pumpkinseed sunfish to 8, and yellow perch to 7.

Over the years, there have not been a lot of Master Angler-sized fish caught in Fish Lake. The last angler to do so was Andrew Polmer of Gould City. Palmer was ice fishing on Feb. 2, 2019 when he jigged up a dandy 10.25-inch bluegill that earned MA honors.

Bass fishing is good along the cobble and boulders. Try dragging a tube bait through the rocks, or suspend a fat shiner minnow below a slip-bobber.

Pike generally cruise along the weedbeds and are apt to hit a spinnerbait, buzzbait (especially in the spring) or a large sucker minnow fished under a bobber.

For walleyes, try trolling or drifting live bait like nightcrawlers and leaches along the weedbeds and drop-offs.