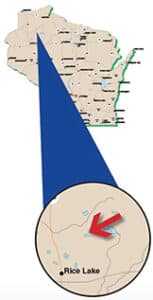 In an area rich in good fishing lakes, Whitefish Lake stands out among its neighboring waters of Sawyer and Washburn counties, thanks to its water quality, size, depth, fisheries profile, and abundant structure with steep-breaking shorelines, shoreline points and a handful of off-shore humps and bars.

The local DNR fisheries team has run a number of surveys on Whitefish Lake over the years, with the most recent begin in 2018, and April 11-15, 2021. Sawyer County DNR Fish Biologist Max Wolter wrote up a report from the 2021 survey conducted just after the ice left the lake.

“This netting survey was well-timed for walleyes and encompassed the peak of spawning activity,” said Wolter, with the nets set in known walleye spawning areas such as creek mouths and points that have been used during past surveys.

A few nets were set in bays for muskies and black crappie, but the water temperature was below the ideal range for those species.

“Still, catch rates for most species compare very favorably to other two-story lakes (characterized as deep and cold, supporting cold-water species such as cisco) like Whitefish Lake,” he said.

Whitefish Lake’s 18-inch size limit and three-fish daily bag limit for walleyes appears to be paying off. The 2021 capture rate was around the 90th percentile for two-story lakes. More than half of the walleyes captured during last spring’s survey were of legal size, and males and females growing to lengths of 18 inches or longer.

“Most walleyes in Whitefish Lake are the product of stocking or possibly emigration from other connected lakes. Natural reproduction is very low,” Wolter said.

Northern pike are found at a moderate to low density in Whitefish Lake, compared to some other lakes in the area, but the team’s catch rate was in the 90th percentile for two-story lakes. Pike size structure in Whitefish Lake is above average for the area, with 50% of pike meeting the DNR’s standard for “quality size,” which means they were 21 inches or longer. However, just 4% of the pike were 28 inches or longer. The biggest fish went about 32 inches. As with most northern Wisconsin lakes, there is no size limit for pike, and anglers may keep up to five per day.

Whitefish Lake’s black crappie population is considered to be a moderate to low density fishery when compared to other lakes in the area. The team’s catch rate came in at around the 75th percentile for two-story lakes.

“Multiple year classes of crappies were present at the time of this survey, and a relatively high percentage were over 10 inches,” Wolter said.

The bag limit for black crappie and other panfish is 25 per day (all panfish species combined). Size wasn’t bad, with 72% of the crappies hitting 8 inches or longer. Another 35% went 10 inches or longer. The biggest crappie was a shade longer than 14 inches.

Although the team set muskie nets, the big fish were a secondary target species during the 2021 survey, with the focus being on walleyes.

“Only 12 muskellunge were captured during this survey, limiting the team’s ability to characterize the population fully. Whitefish Lake is known to produce larger muskellunge than those captured during this netting effort. (We were) very interested when (we) captured a very small muskellunge – around 10 inches – that appeared to be a naturally reproduced fish since its size did not correspond with any recent stocked year classes,” Wolter said.

Muskie reproduction has not been well-documented in Whitefish, and most muskies are believed to be the result of stocking. There is a 50-inch muskie size limit on Whitefish Lake. The survey found 83% of the dozen fish to be longer than 30 inches; another 17% 42 inches or longer. The biggest went about 44 inches.

The DNR’s Whitefish Lake’s stocking efforts get a boost from the Whitefish Lake Property Owners’ Association from time to time. Between 2009 and 2011, the association stocked an average of 2,000 extended growth walleyes at a cost – after grants – of about $3,000 per effort.

However, because Whitefish has been tabbed by the DNR as a walleye research lake since 2012, the DNR also stocks the lake with an average of about 8,000 extended growth walleyes every other year.

The association has been banking donations to pay for future stocking if the DNR ever cuts back on its walleye program.

Outdoor news items from around Illinois.