If you’ve ever headed into the Boundary Waters Canoe Area Wilderness, there’s a good chance your journey began at Moose Lake. Located about 17 miles northeast of Ely, Moose is one of the most popular and largest entry points into the remote wilderness setting. 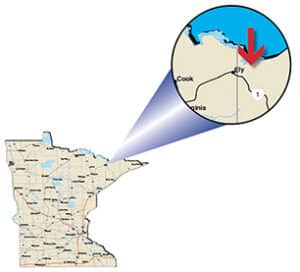 The lake totals 1,300 acres, about half of which is within the boundaries of the BWCAW, so if you want to fish the northeast end of Moose, you need to be aware of that imaginary line and follow the motor restrictions and permit necessities that go with it.

Common fishing rules apply to the southern half of the lake. But the truth of the matter is that Moose is often overlooked by anglers who use it more to access “greener pastures” in the BWCAW rather than spend time fishing its waters.

“It’s a super-popular entry point, and it has big walleyes in it, nice smallies, and huge pike,” said Steve Renneberg, of Arrowhead Outdoors in Ely. “But most people don’t even fish it. I’d say 95% of people use it to get to the other lakes.”

It would appear they’re missing out on some pretty solid fishing. Moose really is an excellent walleye fishery, especially for big fish. Renneberg says Moose, along with White Iron Lake, are the two best options in the area for trophy-caliber walleyes.

According to the most recent DNR survey, walleye numbers aren’t that bad, either. Gill nets averaged more than five fish per lift, above historical averages, and the mean length was 16 inches. In all, over 70% of the walleyes sampled were 12 inches or larger, maxing out 27 inches in length.

“We typically see a pretty good size structure, a nice average size, along with big walleyes,” said Brent Flatten, DNR Fisheries specialist in Tower. “We see fish over 25 inches in every survey, and they are some plump walleyes.”

That’s because Moose is loaded with tullibees, and this rich forage base allows its walleyes to grow large. Finding those large pods of tullibees is usually the key to catching big walleyes on Moose.

Each spring, shorelines and current areas produce the majority of walleyes. During the summer, trolling over deep water on the south end of Moose often yields strong catches of walleyes as they suspend high in the water column to inhale tullibees.

“People catch giant walleyes in the spring, some big girls right off their docks,” Renneberg said. “Then it tends to get overlooked, but if you troll that deep water in the summer, you see schools of ciscoes on the surface and the walleyes are right under them.”

Smallmouth bass fishing is a fine secondary option on Moose. Its smallie population is known more for numbers than size, but it does kick out some big fish as well.

The lake has excellent smallmouth habitat, with plenty of shoreline and main-lake rock, flats, along with its current areas that all seem to hold plenty of fish. Moose also has a few largemouth bass in it, but they’re a pretty rare catch.

“It’s a good smallmouth lake, but we have lakes up here with bigger bass in it,” Renneberg said.

Northern pike numbers are relatively low and always have been, but that leads to some good growth rates. Having the aforementioned tullibees to chew on and plenty of deep, cool water in which to live and grow also doesn’t hurt.

Flatten says there are some good weedbeds on the south end to key on and that the pike in Moose are often overlooked – it’s somewhat of a bonus pike fishery.

Renneberg agrees with that assessment, and he knows some big pike are caught from Moose every year.

“There are huge pike in there – not big numbers, but quality fish,” he said. “Moose is a really good sleeper pike lake.”