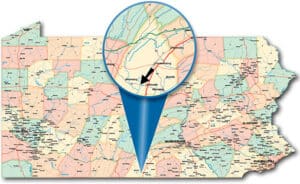 From the early years of colonization of Pennsylvania, both branches of Conococheague Creek played an important role in providing transportation routes into the southern part of the state.

While the small streams are not what you would call boat highways, I can imagine that both Native Americans and the incoming settlers both stopped to fish the cold and clear waters of the streams.

It is hard to fathom what species of fish were prevalent in those early years – perhaps eels and such – but if you visit Conococheague Creek today, trout would probably be at the top of your list.

The main branch, which starts on South Mountain in Adams County and flows westward to the city of Chambersburg before turning south, is both a native and stocked trout stream.

The mountain flow is particularly attractive to those who love to fish the small waters for our state fish, the brook trout. It harbors a fair number of these small, but colorful specimens.

Anglers will find access in both the Caledonia State Park and Michaux State Forest to these pristine waters.

The park section offers a good mix of both stocked and native fish, but as one might imagine, the fishing pressure it receives can be high. Still, it is a good starting/stopping point to take a break to eat and relax.

From the park to the west, fishing sections are sporadic as the stream flows through a variety of private properties. A few sections can be accessed, but the next best bet for trout fishing is literally through the city of Chambersburg.

Not your typical trout setting, but you cannot argue with success. Not only does this section get stocked by the state, but also at least one local group. There is an annual trout tournament early in the season every year, and it attracts hundreds of anglers, yet there are always a few fish that slip through and survive.

The stream runs southward from this point, through a variety of both public and private properties. Gaining access to any section of the stream could put you into some good trout fishing as well as opportunities for panfish of several different kinds, smallmouth bass and chain pickerel.

The stream is not that large at any point, so you can mostly get away with using just hip waders. However, go prepared with various bait and lure options because the habitat changes and just around the bend could be a good spot for a number of different species.

The West Branch starts in Path Valley, flowing almost parallel to Route 75 for much of the way before meeting up with the main branch of the stream just south of Greencastle.

The upper reaches of the stream are well stocked with trout early in the season and the cool waters allow for year-round fishing of this species. As you go further south on this stream, there will be more and more smallmouths in the mix as well as an abundance of small chain pickerel.

This latter species can provide great summertime action, especially in the middle of the day when the heat is on, when other species are in a dormant state.

Wade fishing is the norm on this stream, but the lower reaches may allow you to use a kayak or a small canoe when the water flow is up. Putting in at one point and floating a section to another access point is quite popular.

There are some deeper pools in this section of the stream, which have to be bypassed by wade fishermen, and the watercraft can allow you to cast into areas others can’t.

Unless heavy rain has hit the region, both streams remain mostly clear. That means the use of polarized glasses can allow you to see into the stream and locate fish before casting to them.

As when fishing other streams, if you cannot employ that tactic, simply cast to the current break areas to seek out active fish. You may also locate undercut banks or a buildup of debris in the stream that can act as a harboring area for fish.

Take your time and offer your bait or lure at various angles to entice a strike.

Since this stream is a tributary of the Potomac River, there are occasional reports of anglers catching eels, white perch, small stripers and even shad, but they are rare occurrences and typically limited to the southern reaches of the stream in Maryland.

Go geared for the normal fish species with a light or medium light rod and line. Most of the fish you catch in this creek won’t measure more than a foot long, but what they lack in size, they make up for in numbers.

If you visit from outside the region, there are plenty of food and lodging options as well as several tackle stores in the area to serve your needs. With the turnpike and interstate and several major roadways running to this part of the state, travel is easy.

You may never have heard about the great fishing on this stream, but you should give the branch of the Conococheague a try this fall.

SIZE: 80 miles total, 57 miles in Pennsylvania and 23 miles in Maryland

WHAT YOU SHOULD KNOW: Anglers will find access in both Caledonia State Park and Michaux State Forest.

A good bet for trout fishing is through Chambersburg.

The creek is a tributary of the Potomac River that originates in Pennsylvania and empties into the Potomac near Williamsport, Md.

The West Branch starts in Path Valley, flowing almost parallel to Route 75 before meeting up with the main branch of the stream just south of Greencastle.