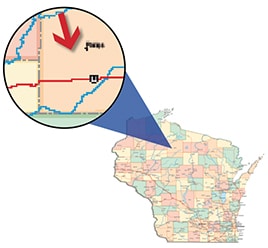 It may take a minute or two for those unfamiliar with lakes in the Phillips area to understand that when locals talk of Soo Lake, they’re actually referring to Lac Sault Dore, a 561-acre impoundment on the Elk River about 7½ miles west of town.

Lac Sault (Soo) Dore is the downstream-most of three impoundments on the Elk River system, but isn’t technically part of the four-lake Phillips chain made up of Duroy, Elk, Long, and Wilson, even though they are all connected by the Elk River.

Lac Sault Dore’s irregular shape covers 14 shoreline miles. It has 10 islands that give anglers a chance to escape the breeze on windy days while standing a reasonable chance to catch fish. The lake has an average depth of 6 feet; its bottom is 85% sand, 10% muck, and 5% gravel in the shallow zone. Tannins draining from surrounding wetlands leave Soo Lake with a brown stain that decreases water clarity and light penetration, so weed edges set up at shallower depths that they do in clear-water lakes.

The DNR fisheries team out of Park Falls ran a fish survey at Soo in 2019. The crew used a combination of netting and shocking in 2019, and the two previous surveys, to make comparisons and note trends in reproduction success.

“It is difficult to characterize walleye population status in Soo Lake because we believe many adults move upstream in the Elk River to Jobes dam,” said Jeff Scheirer, the DNR’s Price County fish biologist.

“Although it is not our chosen method to assess walleye abundance and size, the incidental catch in our late spring electrofishing surveys included walleyes in a wide range of size and age classes to suggest that natural reproduction is still adding a reliable source of new recruits to replace the adults that die from fishing and natural causes,” Scheirer wrote in his most recent report on the lake as he commented on the fact the crew has found a descending number of walleyes in each survey since 2002.

In 2013, the team caught walleyes up to almost 27 inches. In 2019, the biggest walleye was a shade longer than 21 inches. It must be noted that survey timing and water temperatures can mean that fish found in one place one year aren’t necessarily going to be there the next time around.

Scheirer also noted the walleye sex ratio of fish captured during the surveys has been skewed heavily towards females reaching back to the 2002 survey.

The crew didn’t have any luck in catching muskies during the 2019 survey and the  2013 early spring effort was made before waters warmed to optimal temperature (50 to 55°F) for muskie spawning. Still, that year the crew netted nine muskies that ranged 11 to 42 inches and averaged 26 inches. The DNR stocks muskies in Soo Lake in odd-numbered years, usually at a rate of 0.5 large fingerling per acre.

The crew also netted eight largemouth bass at identical capture rates of two bass 8 inches or larger per mile of shoreline during late spring electrofishing surveys in 2013 and 2019.  Largemouths in the 2019 sample ranged 11 to 17.5 inches and averaged 14.6 inches. In 2013, they ranged 9.2 to 16.4 inches and averaged 13.2. Smallmouths outnumbered largemouth bass by nearly two to one in both surveys.

An experimental harvest regulation in effect since April 2018 aims to increase the average length of crappies and bluegills. Anglers may keep a daily bag limit 25 panfish, but only 10 of any one species. Crappies gave a fairly good showing during the 2019 spring survey, with the biggest fish longer than 11 inches.

There is a DNR boat landing off Hwy. W. Price County has a shallow-water boat ramp on the northeast shore off Hwy. S.