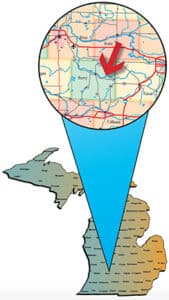 Mention muskie fishing in Michigan and most anglers immediately think of Lake St. Clair. And for good reason. This Great Lakes connecting water lies between Lake Huron and Lake Erie and boasts a world-class muskie fishery.

If you’re looking for inland lake muskie options, however, it would be wise to consider Barry County’s Thornapple Lake. But don’t expect to have the lake all to yourself. Since the state record northern muskie was caught in Thornapple in 2000, muskie fishing traffic has increased faster than the price of gas.

Since then Thornapple has become a destination muskie lake, luring anglers from across Michigan as well as other nearby states to ply its 409 acres of surface water.

As good as the muskie fishing is, that’s not the only fish anglers target in Thornapple. The lake’s turbid waters also hold excellent numbers of black crappies and good numbers of walleye, perch, and bass.

The lake is located in east-central Barry County about five miles southeast of the town of Hastings.

The lake features an irregular shoreline with plenty of points, breaklines, and small bays. The maximum depth of the lake is 31 feet, although most of the water is less that 20 feet deep.

About half of the shoreline is developed with cottages and homes. Wetlands and wooded areas cover the rest.

Thornapple is natural lake, having been formed during the Wisconsin glacial episode more than 10,000 years ago. The Thornapple River enters the lake at the northeast end and drains to the west. It eventually dumps into the Grand River just east of the city of Grand Rapids. High Bank Creek and Mud Creek also flow into the lake.

Thornapple Lake has a deep history of fisheries management dating back to at least 1934. In the early years, fisheries managers stocked bluegills, largemouth bass, and yellow perch.

The DNR has been stocking Thornapple Lake with muskellunge since 1964 and walleyes since 1981. Both species are still stocked today.

“Thornapple Lake will continue to be managed as one of Barry County’s premier warmwater fisheries,” wrote DNR Fisheries Biologist Jay Wesley in a report on Thornapple Lake following the last fisheries survey there. “Stocking of northern muskellunge and walleye should continue.

The lake is full of white, redhorse, and shorthead redhorse suckers, which provide a good forage base for the muskies.

Eight fish caught in Thornapple Lake since 2015 have qualified for Master Angler honors including five muskies ranging between 42.5 and 48.5 inches long, a 29.5-inch walleye, a 27.5-inch bowfin, and a 41-inch carp. (Fish entered in 2020 have not yet been compiled by the DNR.)

The fishery in Thornapple Lake is due to be surveyed again, but in the last survey the DNR collected 11 species of game fish including panfish, walleyes, muskies, pike, and bass.

The survey also produced good numbers of sunfish to 7 inches, rock bass to 8, largemouth bass to 17, northern pike to 34, and muskies to 38. Fair numbers of walleyes were caught. They ranged  up to 23 inches, and 56% were over the legal size minimum of 15 inches.

“The walleye stocking program at Thornapple Lake has been successful, although only 15 walleye ranging from 7 to 23 inches were collected in this survey,” Wesley wrote. “Walleye were growing 1.7 inches above the state average.”

Jig-and minnow combos usually are deadly for winter walleyes, but the fish are sometimes tough to locate. Tip-ups rigged with a shiner also produce. Try the edge of weed lines in shallower water early in the winter, then move a little deeper as cold weather sets in.

Muskie anglers cast and troll large bodybaits and bucktail spinners with good success. Look for muskies to be cruising  the lake’s many weedy breaks during the summer months.

“It gets a lot of recreational boat traffic,” said Brian Kinter, a fisheries biologist for the ODNR Division of Wildlife