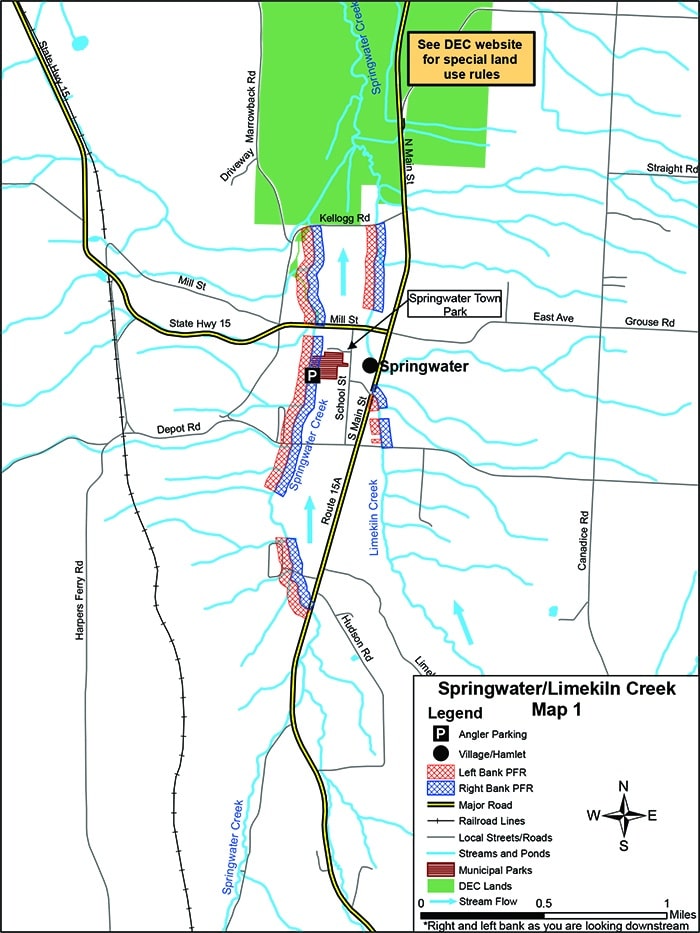 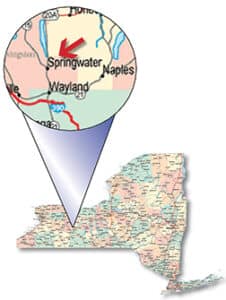 In Livingston County, Springwater Creek, and its little tributary brother, Limekiln Creek, offer approximately 2.4 miles of PFR to anglers pursuing primarily rainbow trout, along with some brown trout fishing. This access can be found in and around Springwater Village and lies just south of Hemlock Lake.

Springwater Creek then flows from the PFR through the southern portion of the Hemlock-Canadice State Forest, where there is some access via a multi-use trail system, before entering Hemlock Lake itself, and the lake’s undeveloped shoreline.

The PFR is actually on both streams, 1.8 miles is on Springwater Creek, while there’s another .6 miles on Limekiln Creek, which parallels Springwater before the two streams merge within the Hemlock-Canadice State Forest.

“They’re a little different,” New York State Department of Environmental Conservation  Bureau of Fisheries Aquatic Biologist Pete Austerman said of the two creeks. “Limekiln runs through the residential part of Springwater. It really doesn’t have as good of habitat as Springwater Creek in that section. It does have similar spawning habitat that the rainbow trout use that run up out of Hemlock Lake. But the habitat itself is a little lacking, there aren’t as many pools or undercut banks.”

Springwater Creek’s PFR includes access at a town park, but Austerman maintains that it is the more favorable trout stream of the two.

“It runs through the village,” he said of Springwater Creek, “but meanders around more, like a natural, flowing stream.”

The spring of the year is prime-time for big ‘bows that run upstream to spawn from Hemlock Lake. But Austerman says brown trout are caught all year long, and are also a product of Hemlock Lake.

“There are some wild browns and they’re there all year, and it’s definitely worth fishing for those, more in Springwater than Limekiln,” he said adding that the brown trout fishery was unintentional.

“It just happened on its own, it’s not something we tried to do,” he said. “We had some brown trout in the lake over the years to provide a lake fishery, and eventually some of them ran up into the stream, reproduced and now there seems to be a population of brown trout in the stream and they’ll hang out all year.”

Austerman said browns have been found during spring sampling when looking for the rainbows, and then again when DEC has sampled in August to look for juvenile rainbow trout. The browns can be up to 15 inches, even a little larger.

Getting back to the rainbows, although Hemlock Lake is producing a quality fishery for them, DEC has resumed stocking, putting in 4,000 8-inch yearlings this spring, which were fin-clipped. These are stocked in Springwater Creek, and Austerman says they are the Finger Lakes strain, which come from Keuka Lake.

“We’re stocking them in streams, not necessarily to be caught right away, but to head into the lake, return and then be caught when they’re spawning,” he said. “They also provide a fishery in the lake itself.

The creek changes somewhat as it leaves the PFR and enters the state forest, which offers limited access.

“It’s a ripple-pool stream, gravelly, I would say about half-way through there and then it flattens out into a slow-moving, soft-bottom stream,” he said. “So, about half of that on the state forest is the type of stream that when you get further up it’s worth fishing for brown trout and rainbows in the stream.”

In some years – not this one – small boat anglers such as those in canoes and kayaks can venture upstream from Hemlock Lake. However, the water is very low this year making such a venture difficult. When possible, however, this can get anglers access to a part of the stream that sees little angling pressure.

The Finger Lakes region offers some of the best fisheries in New York, and Hemlock Lake’s tributaries such as Springwater Creek are sure worth consideration for wetting a line.

Finger Lakes and Tributary Regulations apply, which include a limit of one rainbow trout and a minimum trout size limit of 15 inches in this section. No more than three trout in combination can be kept. See Page 59 of the new Fishing Regulations Guide for more details.

The Village of Springwater is located south of Hemlock Lake. Public Fishing Rights to both Springwater Creek and Limekiln Creek surround the village.