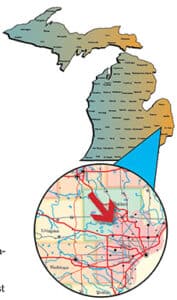 Cass Lake is the largest lake in Oakland County. It features 1,280 acres of surface water and a maximum depth of 123 feet. Its vast basins, bays, canals, and coves are full of game fish including largemouth and smallmouth bass, walleyes, northern pike, a full slate of panfish as well as longnose gar, carp, white suckers, bullheads, and bowfin.

There are also a few rainbow trout – thanks to a local association, which holds a fishing derby each spring and stocks 100 to 150 rainbow trout the day of the event – and a remnant lake trout or two from past stocking efforts.

“Cass Lake continues to support a diverse fish community and quality fishery,” wrote DNR Fisheries Biologist Cleo Harris in a summary of a 2018 survey of the fishery in Cass. “During the 2018 survey there were 29 total fish species observed including three non-natives (redear sunfish, common carp, walleye). This high number of species is above average for lakes in Lake Erie Management Unit (18 species) and twice that of the state median (14 species)…”

Located in central Oakland County, southwest of the city of Pontiac, Cass Lake features an irregular shoreline, several sunken islands, points, and an array or coves, bays and canals. It offers 28.6 miles of shoreline.

The lake has four basins and despite its depth, nearly 40% of the water is less than 10 feet deep.

The Clinton River enters Cass Lake from the northwest and exits to the northeast through a water level control structure to Otter Lake.

Cass Lake has a long record of management dating back to the first survey of the fishery in 1890. The first stocking event occurred in 1933 and included bass and bluegills. DNR records indicate that crayfish were stocked in Cass Lake between 1938 and 1940 to provide forage for largemouth bass and smallmouth bass. In the 1950s, DNR stocking efforts were focused on coldwater fish species including kokanee salmon, rainbow trout, brown trout, lake trout, and splake. The idea was to create a two-story fishery with both warmwater and coldwater species. These programs ended due to poor survival and lack of angler interest. There was a one-time stocking of northern pike in 1983, and redear sunfish were stocked in 1995 and 1996.

Bluegills and rock bass were the most abundant game fish found in the survey. Bluegills ranged up to 9 inches and rockies to 11.

“Bluegill is one of the dominant species in Cass Lake and is the most harvested by anglers according to the 2016 angler survey,” Harris wrote in his summary. “All metrics for the bluegill population suggests a good quality fishery.”

The survey also found good numbers of pumpkinseed sunfish and yellow perch both ranging up to 9 inches, although most of the perch were undersized. There was also a fair number of black crappies to 11 inches, and a few hybrid sunfish and redear sunfish.

“Cass Lake offers a quality panfish fishery with a variety of species for anglers to target,” Harris wrote.

Largemouth and smallmouth bass were collected in very good numbers. The largemouths ranged up to 15 inches and the smallies to 19. Bass tournaments are very popular on Cass with no fewer than 20 tournaments scheduled in 2021.

“The walleye population in Cass Lake provides a fair fishery and has good growth rates,” Harris wrote. “It was encouraging that six age-1 walleye were captured, likely indicating survival from the stocking efforts in 2017.”

To catch walleyes, target the steep drop-offs along some of the lake’s deeper holes with crankbaits. Crawler harnesses and jigs tipped with minnows, crawlers, or leeches will take fish along the breaks and sandy flats.

The shoreline of Cass Lake completely is developed. Bass anglers take advantage of this by fishing around the docks and rafts for largemouth. The best action often occurs in the mornings on topwater baits and tubebaits.

Coles Bay in the northeast corner of the lake, and the area around Wards Point both hold smallmouth bass. Crayfish-imitating baits and spinnerbaits work well.

The only downside to Cass Lake is that it attracts an abundance of recreational boating activity, which makes fishing tough on weekends. Your best bet is to take a mid-week trip to the lake or fish very early on the weekends.

There are two public access sites on Cass Lake. The main access is located at Dodge Park No. 4 off Baywood Road on the north shore of the lake. It features two fishing piers, a paved ramp, and parking for about 80 vehicles.

The second is at West Bloomfield’s Marshbank Park off Hiller Road. It features a kayak/canoe launch along with a fishing pier.