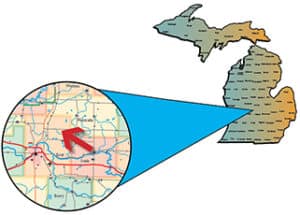 Bass and bluegill are the main draws for anglers on Kent County’s Wabasis Lake. But a recent stocking program is aimed at adding another game fish to the mix.

The DNR attempted to establish a walleye fishery in Wabasis Lake by planting more than 120,000 spring fingerlings between 1987 and 1992, but the fishery never took off.

“There continues to be strong demand for walleye fishing opportunities in southwest Michigan. As one of the largest public lakes in Kent County, Wabasis Lake is a likely candidate for walleye stocking,” wrote DNR fisheries biologist Brian Gunderman in a summary of the most recent survey of the lake. “Summer water temperatures and oxygen concentrations in the lake, however, are outside of the optimal range for walleyes, and survival from spring fingerling plants appeared to be poor. Recent surveys and angler reports on southwest Michigan lakes have revealed that stocking of fall fingerling walleyes has created walleye fisheries in other lakes with similar habitat limitations.”

The recent stocking effort is still being evaluated.

At 418 acres, Wabasis Lake is one of the bigger lakes in Kent County. It provides anglers with some quality fishing opportunities, but the size of the lake can also hinder anglers who are unfamiliar with the water. Maps and fish finders are very helpful.

Named after the Indian chief Wab-ah-see, which means White Swan, Wabasis Lake is located in eastern Kent County about seven miles west of the town of Greenville. It features an irregular shoreline, a couple sunken islands, and several points, bays, and drop-offs. The water is slightly stained and dips down to a maximum depth of 58 feet. About 40% of the lake is 30 feet deep or deeper.

Beaver Dam Creek enters the lake at the south end of the west basin and an unnamed creek flows in from Mud Lake at the east end. Wabasis Creek flows out of the lake in the northeast corner and drains into Little Wabasis Lake.

The predominant vegetation is coontail and curly-leaf pondweed.

About 90% of the shoreline of Wabasis Lake remains undeveloped, which is rare for lakes in southwest Lower Michigan.

The most recent survey of the status of the fishery in Wabasis Lake was a joint venture between Central Michigan University and the DNR. Results showed a diverse fishery.

The survey turned up 3,407 fish including 23 species. Panfish, including bluegills, crappies, sunfish, rock bass, warmouth bass, and perch were found in good numbers. Largemouth bass and northern pike were the main predator species collected in the survey, although the bass sample included a lot of undersized fish.

Bluegill was the most abundant species captured in the survey. They ranged up to 9 inches, but just 23% were 6 inches or longer, which is considered acceptable size for anglers.

Crappies ranged up to 13 with 52% acceptable for anglers. The survey also found good numbers of yellow perch. Most were undersized, but a few ranged up to 9 inches.

Pumpkinseed sunfish ranged up to 7 inches with 71% measuring 6 inches or bigger. The survey also turned up good numbers of hybrid sunfish to 8 inches, rock bass to 10, and warmouth bass to 9.

Largemouth bass numbers were strong, but only 4% of the catch was 14 inches or larger, the legal size for bass. Anglers report catching decent numbers of legal-sized bass including several trophies. The DNR issued six Master Angler awards for bass caught in Wabasis Lake between 2000 and 2015.

The survey nets also produced fair numbers of northern pike to 34 inches with 46% measuring 24 inches or larger, bowfin to 24 inches, and longnose gar to 33.

Panfish are present throughout the lake. The shallows produce the best fishing in the spring as panfish move in to spawn. During summer and winter months, work the weedbeds in 8 to 30 feet of water. Wax worms, leaf worms, crickets, and small leeches will catch ’gills, sunfish, and rock bass. For crappies, try suspending a small minnow beneath a slip-bobber near the outside edge of a weedbed.

Bass and pike can be found near the sunken islands and along weedbeds leading to deep water. The east bay and the southeast bay are both worth checking. Spinnerbaits in white or chartreuse, or rubber worms in pumpkinseed or purple, usually will attract attention.

For pike, try suspending a large shiner or sucker beneath a big bobber and dangle it over a deep-water weedbed. Crankbaits like Rapalas, along with spinnerbaits, will also catch pike.

For walleyes try working a jig-and-crawler or jig-and-leech around the sunken islands, or troll crawlers and leeches along the weeds in 8 to 15 feet of water.

The lone public access site is located at the west end of the lake at the county park. It features a paved ramp and parking for up to 35 vehicles.