Cuba Lake might be small, but it offers big-time fishing 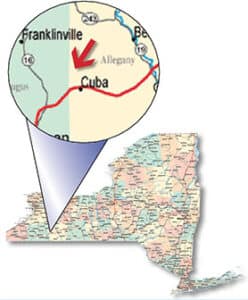 When it comes to waters that support ice that is solid and safe enough for anglers, those waters that sit at higher elevations are typically more reliable. Such may be the case with Cuba Lake, in Allegany County, which sits at 1,545 feet above sea level.

In a year when ice has been hard to come by, Cuba Lake was one of the first in western New York to attract ice anglers, with some getting on even before the New Year.

While there’s no telling what Mother Nature has in store, hopes are high the lake will remain accessible well into what is now late winter. Obviously, anglers should keep up on local ice conditions before venturing out on any lake.

Some anglers feel that Cuba Lake gets too much ice fishing pressure, which can likely be attributed not only to its ice availability, but the fishery itself. This man-made lake, that was created in 1858 as a source of water for the Genesee Valley Canal system, gets drawn down 6 to 8 feet during the winter months, which changes the weed structure and thus the overall habitat, having a year-round effect.

New York State Department of Environmental Conservation Region 9 fisheries biologist Justin Brewer theorizes that the draw-downs affect nearly every species of fish in the lake, and there are several game fish species, mainly walleyes and smallmouth bass, which he says are monitored more than they are managed.

On the subject of walleyes, Brewer said “we stocked until 1998. Our surveys were showing they were abundant through natural reproduction and it was slowing the growth rate down because we were stocking on top of them. So, we haven’t stocked the lake in over 20 years, with anything.

“We manage it through natural reproduction,” Brewer continued. “We’re monitoring it actually as it’s a pretty exceptional fishery for being such a small lake and the circumstances with the draw-down, which may actually be beneficial. So we manage it for walleyes and smallmouths. The habitat works out really well for them, but the pike do really well, which were introduced in the early ‘90s, not by DEC but by accident.”

Brewer said that yellow perch and panfish populations are solid, but he is concerned that over-fishing could have an adverse affect down the road.

“We would recommend using conservative harvesting practices,” Brewer, who fishes the lake regularly himself, said. “The lake is unique in the fact that you may not catch a lot of fish, but you are going to catch quality fish. But there are days where you’ll catch a lot. So, in order to maintain that, release some of those big panfish.”

Although there is a state boat launch on the lake’s northwestern corner, Brewer indicated that it can be tough to get on the ice there because of a mud-flat created by the winter draw-down. During the hard-water season, most anglers access lake near the dam at the southern end. But Brewer says once you’re on the ice, the fish can be anywhere.

“It has a pretty abundant fish population for such a small lake, when they draw it down I think fish use all types of habitat,” Brewer said. “In my own personal experience, I’ve fished all around the lake and I always have a mixed catch, it seems, no matter where I’m at in the winter.”

Brewer added, “a lot of people fish towards the dam, it’s close to the access, that would be your main basin. People do really well there, there’s walleyes there. Some guys will fish tip-ups generally inside 20 feet and that’s productive.

Smallmouth bass are a highly targeted species in Cuba Lake.  Brewer says that although there are some big largemouths caught, he feels the draw-downs affect their spawning habitat, whereas the more rocky structure of the deeper parts of the lake are more favorable to smallmouths.

“There used to be more of them, so I don’t know if it’s a cyclical thing,” Brewer said of the lake’s largemouth bass population. “But the smallies are definitely the dominate black bass species in there and it’s a popular fishery, pretty much year-round. I catch a lot of them through the ice on tip-ups.”

Getting back to the draw-downs, Brewer analyzes their affect saying, “obviously it concentrates the fish. After the winter the weeds die out. So all of your really shallow littoral is kind of suppressed, but then when it comes up in the spring you have a lot of shallow flats, like up towards the inlet, that provide good habitat that some other lakes don’t.”

The Village of Cuba lies along the Southern Tier Express Way. Cuba Lake is just a few miles north of there. Winter access is near the dam on the south end of the lake. Summer access is at state boat launch in the northwest corner of the lake.