For a grin on Barrett,  drop a line for walleyes, crappies 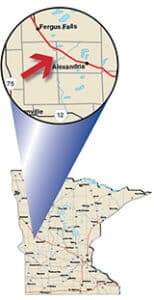 Grant County’s Barrett Lake is an impoundment of the Pomme de Terre River – basically a wide spot in the river, which means there’s an abundance of fish species utilizing this 530-acre reservoir.

Barrett contains fish traditionally found in lakes, such as walleyes, panfish, and bass. But it also has several riverine species, including bigmouth buffalo, freshwater drum, and longnose gar, among others add to the uniqueness of the lake.

Barrett’s connection to the river also means it’s a turbid but fertile system. Fish grow relatively fast in the lake, and they all seem to benefit from the physical characteristics that the system offers.

For example, Barrett’s walleye population is built through natural reproduction. Although the lake is stocked with walleyes during odd-numbered years, highly successful river and in-lake spawning accounts for its high walleye numbers.

Gill-net catches during a 2017 survey of Barrett Lake averaged more than eight walleyes per set. Even more impressive, 10 year-classes were represented, fish from 12 to 28 inches were sampled, and the walleyes averaged 18 inches in length.

“Catch rates on Barrett are usually above the expected range for that type of lake,” said Bill McKibbin, acting DNR Fisheries supervisor in Glenwood. “The average size is usually pretty good, too. It’s a very healthy walleye fishery.”

Barrett also is recognized as a consistent crappie producer. It supports both black and white crappies, although black crappies are more abundant.

As they are in most lakes, the crappie population in Barrett is cyclical. Numbers go up and down, offering boom or bust situations.

If the 2017 lake survey is any indication, one of those boom periods could be taking place right now. Two- and 3-year-old fish made up 80% of the crappies sampled, and they averaged about 8 inches in length.

“Historically, white crappies have always been in Barrett, but I think black crappies just have more of a competitive advantage,” McKibbin said. “We sampled five black crappie age groups in 2017, but the largest (crappie) was a white crappie that measured just over 12 inches in length.”

Largemouth bass and bluegill numbers have always been mostly moderate in Barrett. Habitat limitations such as water level fluctuations during the spawn, seasonally poor water clarity, and limited vegetation have kept their numbers in check.

But because zebra mussels have made their way into the lake, water clarity has slightly improved and vegetation has started to increase. That could increase bass and bluegill numbers.

DNR electrofishing work in the spring of 2017 produced more bass than expected, mainly an abundance of 2- and 3-year old fish. The majority of bluegills sampled in 2017 also were young fish.

“We’re seeing an expansion of productivity in the system, which could mean better bass and bluegill opportunities,” McKibbin said. “Both were relatively small (in size) in 2017, but their numbers improved. Many of those small fish should be nicer now.”

Northern pike numbers also have increased in recent years, and McKibbin says the overall size structure of pike is better than it is in most lakes in the area.

Although not as heralded, Barrett does hold an abundance of black and yellow bullheads as well. These are good-sized fish, so if you’re looking for some old-school fishing opportunities in the way of bullheads, Barrett is a safe bet.

“It’s pretty popular, and people catch a variety of species from (the pier),” McKibbin added.