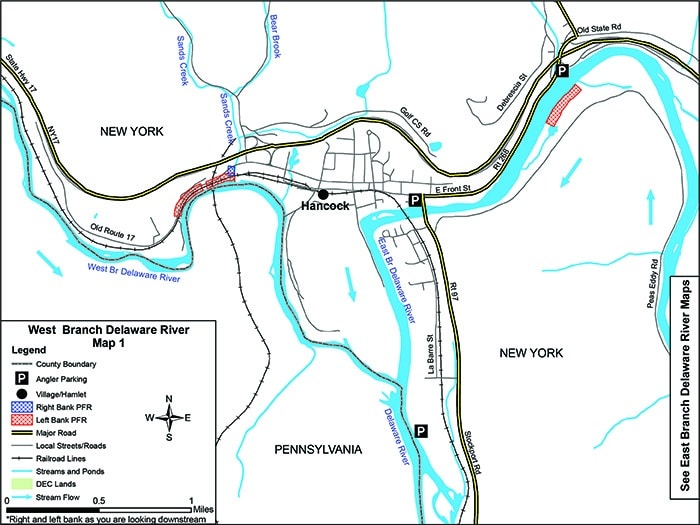 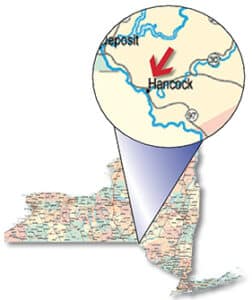 When conditions are right in southeastern New York, serious anglers don’t fret about winter. Instead, they’re out in their boats (mainly small boats, canoes and kayaks) having at it on what angler/author/radio show host David Dirks calls the main stem of the Delaware River.

Dirks is referring to the northern-most section of the Delaware near Hancock, in Delaware County at the confluence of the East and West branches of the Delaware River, about 25 miles downriver to Callicoon in Sullivan County.

Along the way, he says, are a number of public access sites where anglers launch small boats. Some go after walleyes, while Dirks prefers to target rainbow and especially brown trout that are liberally stocked throughout the Delaware River watershed.

“We’re fishing browns and rainbows,” Dirks said. “I’m always looking for trout, but sometimes you’ll connect with a nice walleye. Walleyes are a big winter fish, but on those warm days, the walleye fishermen are out.

The upper Delaware River, where the West Branch turns into the main stem and where it flows along the Pennsylvania border is open year-round for catch-and-release trout fishing, artificial lures only.

The border water begins just below Hancock at the confluence and stretches nearly 75 miles down to Port Jervis. Dirks and his fishing cohorts focus on the upper region, when the weather is right.

“There’s a few of us that will venture out during a warm spell. As long as there’s no ice,” Dirks said. “The problem is the ice up, and if it doesn’t ice up the Delaware River on the New York/Pennsylvania border is productive.”

Days when temperatures are in the 40s or higher are ideal, and Dirks feels the upper area doesn’t see the ice issues that may occur down-river.

“If you get a deep freeze, and the water freezes up, it’s a littler harder to get into,” Dirks said. “Not so much the upper area, but as the current slows down on the lower section, a couple miles down from the confluence, that slower water does have a habit of icing up. Most winters, lately, have been mild enough where it’s hasn’t been a problem that far up.”

Dirks likes to both fly fish and spin fish. For spin fishing he says “my favorite is shallow divers that go maybe 2 or 3 feet deep depending on the temperature. If the water warms up midday, they’ll look up a little bit more and I don’t have to go so deep.”

“And it depends on the stretch,” he added. “If it’s a deeper hole I’m going through I’ll run something that goes 8 or 10 feet. The water’s pretty clear this time of year so most of your deep runners are going to stand out.

As for a boat, Dirks said many anglers use small drift boats, but he really likes his fishing kayak. He also likes the fact that river is less crowded during the winter season.

“If it’s warm enough, and the water levels are not too high, I’ll go out in the kayak with neoprene waders,” he said. “The biggest thing that I like is that even on a warm day you’re not going to find anybody out there. You’re going to have access to water you don’t usually do. If the water levels are right, you’re going to fish slower, because the water is slower, but you’re not going to run into any crowds at all. You’re lucky if you see another boat.

It should be noted that north of Hancock, on both the East and West branches, the New York State Department of Environmental Conservation maintains several public fishing rights locations, which attract anglers during the regular trout season from April 1 well into the summer months.

DEC stocks tens of thousands of trout in both branches the Delaware and throughout its massive watershed.

If Dirks’ name rings a bell, perhaps it is because his byline appears here in the NYON Fishing Reports (Page 23) where he puts together a report for southeastern New York, including the Catskills.

Dirks has authored a handful of trout fishing books, pens a weekly outdoors column and hosts DirksOutdoors radio on Saturday mornings on WTBQ FM/AM in the Hudson Valley.

A list of special regulations for the border water stretch of the Delaware River can be found on Page 23 of the 2020–21 New York Freshwater Fishing Guide. Be sure to check them as they include regulations for trout, bass, striped bass and walleyes. Anglers with a New York fishing license can also fish the non-New York (Pennsylvania) portion of the river.

While Dirks fishes the northern-most section of the main stem near Hancock down to Callicoon, the river extends 75 miles along the New York/Pennsylvania border with numerous boat launches and special fishing access points along the way.