Small boat fishing on Big Moose Lake in the Adirondacks 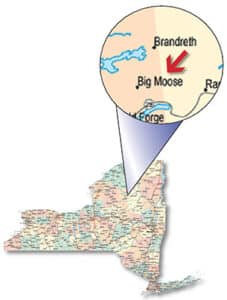 In the summer of 1906 a young girl named Grace Brown drowned in Big Moose Lake. Her assumed boyfriend, Chester Gillette, was charged with murdering her and was later executed. The case inspired writer Theodore Dreiser’s 1925 novel, An American Tragedy. The book would further inspire more literary works, and eventually the 1951 box office film A Place in the Sun and even an opera.

Somewhere along the way it also helped put Big Moose Lake on the map. Although many who visit this lake are hoping to see Brown’s ghost, which they believe haunts the bay where she perished, some also show up for the fishing.

Big Moose Lake is a fairly large body of water but the only public access to it is the town of Webb’s launch that only allows car-top boats. However, rentals may be available at local resorts and a marina.

Leslie Resseguie, an aquatic biologist with the New York State Department of Environmental Conservation said Big Moose Lake is managed as a lake trout and brook trout fishery. This is a huge success story considering that decades ago this lake was considered dead due to acid rain, before eventually being reclaimed.

In the past decade, thousands of lake trout and brook trout have been stocked by DEC in Big Moose Lake.

With its high elevation and depths of 70 feet, Big Moose Lake seems perfect for lake trout to thrive.

And then there’s the brook trout.

“Brook trout were not sampled in the 2019 surveys, although gear was likely too big and set too deep to effectively encounter these fish,” Resseguie added. “A few brook trout have been caught in previous surveys and are usually associated with creek mouths.”

In his 2016 book, Fishing the Adirondacks, Spider Rybaak suggests summer anglers seeking lakers and brookies target the eastern end of the lake where the 70-foot deep hole, the lakes deepest, is likely to hold these species. Other literature has also suggested fishing for brook trout near streams, where DEC’s aforementioned surveys discovered their presence.

Standard presentations like Christmas tree rigs, cut bait and spoons were all suggested by Rybaak as well as dry flies on the surface in the evening.

Bass have also become prominent in the lake and DEC feels they may be a bigger factor to the brook trout fishery rather than that of the lake trout.

“There is a population of introduced largemouth bass that may be competing with the brook trout and forcing them into limited habitat, Resseguie said. “The lake trout and the largemouth bass appear to be able to cohabitate as they occupy different zones of the lake.”

Big Moose Lake is located in the west-central Adirondacks near popular tourism towns Inlet and Old Forge. The area is rich in fishable waters, including the popular Fulton Chain. But once you head north on Big Moose Road a more remote experience awaits. The same trout anglers headed for Big Moose Lake should also give nearby Moss and Twitchell lakes a try, as both are stocked with brook trout and Twitchell also has lakers.

Continue another 13 miles (approximately) from Big Moose Station and the dirt road will eventually bring you to the Stillwater Reservoir; a camping and smallmouth fishing paradise; albeit a windy one.

Getting back to Big Moose Lake, during the summer months, and especially on weekends, consider getting out there in the early morning or evening to capitalize on the trout fishing and also to avoid local boat traffic. Better yet, plan a mid-week adventure or consider visiting away from the summer season.

What you’ll find is a diverse, serene lake with plenty of structure and quite a bit of history. Hopefully, you won’t find the ghost of Grace Brown – unless that’s what you’re looking for.

Statewide regulations for all species, including lake trout and brook trout, apply.