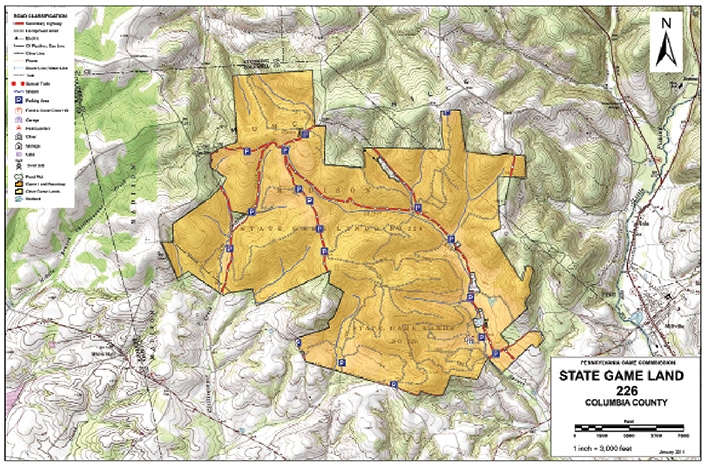 Comprised of 4,335 acres  in Columbia County, the initial parcel of State Game Land 226 was purchase in 1957. It was immediately established as a “cottontail rabbit management area.” 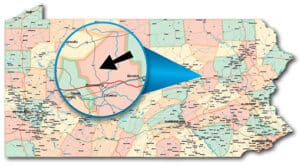 Rabbit hunting was more popular then, and in 1939 it was estimated that nearly 4 million rabbits were bagged in Pennsylvania.

The Game Commission wanted to showcase game land 226 to determine and confirm the importance of desirable habitat.

Additionally, 12 miles of old logging roads were reworked and seeded with a mixture of blue grass. The rabbit management plan included thousands of feet of woodland border being cut.

More improvements dictated by the rabbit management were to follow. In the three-year period between 1966 and 1969, another 2,756 acres – most of which were active and inactive farms – were purchased.

During this land-purchase period, the late Columbia County Game Warden Harold Harter worked tirelessly to secure these properties, which involved 21 separate tracts of land being purchased.

Much of this additional purchase of acreage in State Game Land 226 was laid out in contour strips and planted to grass and clover. Logging roads were improved and stands of evergreens were incorporated throughout this additional parcel.

During this era, 200 acres were sharecropped by local farmers, with the agency also maintaining 150 acres under cultivation. The total acquisition cost of this game land was $205,343.

While the parcels making up State Game Land 226 are mostly contiguous, because of the numerous purchases involved, the border is irregular and there are some small interior holdings.

Elevations run from about 70 feet near Spruce Run on the southeastern border of this tract to about 1,700 feet near the headwaters of Spruce Run in the Muncy Hills area.

This game land’s eastern border is near adjacent to Montour County, while on the north it is almost contiguous to Lycoming County. The east branch of Chillisquagee Creek meanders through the eastern portion of this tract.

Game land 226 offers easy access. Located 12 miles north of Bloomsburg and adjacent to Millville, entrance of this parcel can be had near the intersections of routes 42 and 254. Easiest access is from Route 254.

During the 1960s, with the success of the rabbit-management plan resulting in an abundance of cottontails, pheasants were also plentiful.

In addition to excellent habitat, natural reproduction and Game Commission pheasant stocking, Columbia and Montour counties enjoyed the involvement of many landowners and sportsmen’s clubs in the “Day-Old-Chick-Program.”

These birds, at the age of 12 weeks, were supplemental to the agency stocking program.

Small-game enthusiast traveled long distances to hunt in Columbia County, as well as adjacent Montour County. State Game 226 was the apex of this sportsmen invasion and received near-legendary status.

Alas, nothing lasts forever. During the 1970s, reproduction in the wild bird population dwindled, many landowners and sportsmen’s clubs exited participation clubs – and with stocked bird numbers declining, coupled with increased hunter interest in the fall turkey season, interest in rabbit and pheasant hunting also waned.

This game land continues to be utilized by horseback riders, mountain bikers, bird watchers and hikers. A three-mile-long horseback trail begins at a parking lot along Gillespie Road and ends at a parking area along Engles Road.

Admittedly, while rabbits and pheasant hunting continue to be adequate, it’s no secret that these species are not found in the same numbers as a half-century past.

Doves and woodchucks are also found here in good numbers. As with most game lands, squirrels are abundant.

While in earlier years much of the deer hunting took place in the Muncy Hills area, ongoing timbering through this game lands has resulted in deer now being found in good numbers throughout this tract.

Currently there are about 150 acres that are treated and planted with switch and summer grasses.

Also, Gildea reported that two years ago, a local landmark, an aged barn that was used by the Game Commission for storage, was demolished because the deteriorating structure had become a safety hazard.

What you should know: Elevations run from about 70 feet near Spruce Run to about 1,700 feet near the headwaters of Spruce Run in Muncy Hills area.

A 10-mile-long snowmobile trail is available, as well as a horseback riding trail.

The terrain mainly consists of woodlots and food plots.