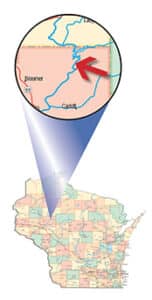 According to local lore, Chippewa County’s Old Abe Flowage was named after a bald eagle by the same name that witnessed 37 Civil War battles and skirmishes with the 8th Wisconsin Volunteer Infantry Regiment.

The town of Jim Falls sits at the south end of Old Abe Lake and it’s there in Jim Falls where tavern keeper Daniel McCann bought the eagle from a Lac du Flambeau tribal member for a bushel of corn. Historical reports say the eagle was captured in the spring or summer of 1861 by a Chippewa Indian near the South Fork of the Flambeau River in what is now Price County. McCann supposedly then sold the eagle that same year to the Eau Claire Militia, the Badgers, for $2.50. The Badgers took Old Abe with them to Madison where they became Company C of the 8th Wisconsin Volunteer Infantry Regiment that trained at Camp Randall prior to being called into the Civil War.

Legend has it Old Abe survived some bloody battles, including battles at Vicksburg and Corinth, Miss.

Whether today’s Old Abe Flowage anglers know the history of the lake’s naming, no doubt they enjoy the sights of soaring eagles as they fish the 11-mile stretch of impounded river from Cornell in the north to Jim Falls to the south. The flowage sits just 10 miles north of Chippewa Falls.

Joseph Gerbyshak, of Eau Claire, is the DNR’s fish biologist for Eau Claire and Chippewa counties. He pointed out that anglers may see different acreages attributed to Old Abe, including some as low as 450 acres. The correct measure is 996 acres.

“It’s a very riverine impoundment. It has two landings, both really nice and both on the west side. There are some pretty good shore fishing opportunities along the river,” said Gerbyshak. “You could put a small boat or canoe in at Cornell and fish down to Jim Falls.

“Fly fishing on the rivers has kind of taken off around here and some drift boat fishing has popped up. This would be a great stretch for fly fishing smallmouths and muskies from drift boats,” he said.

“You can also get a pretty decent sized boat upriver, too. You wouldn’t be constantly bouncing off rocks, but you do have to pay a little attention to where you’re going.”

With its stained water and current, Old Abe “fishes well” during the day. There is not a lot of backwater habitat, nor a lot of vegetation. Fish rocks, wood, and current breaks.

All species but muskies do well on natural reproduction. The DNR does stock Upper Chippewa River strain muskies – as large fingerlings of 11 to 12 inches – at a rate of one per acre, so about 1,000 fish, every other year.

Gerbyshak’s crew last surveyed Old Abe in 2009. The crew will be out there again in 2021. It’s difficult to use fyke nets because of the current, so most surveys are run with electro-fishing gear.

“The walleyes, smallmouths and muskies – there is a pretty healty population of all three species,” he said. “The most impressive size-wise might be the smallies. We caught them up to 18 inches and there were a number from 16 to 18 inches. There is a pretty nice size structure.”

The crew caught 22 muskies that ranged from 11.2 to 42.5 inches. There are likely bigger muskies in there; the electro-fishing survey didn’t target muskies. The crew did “roll” some big fish, but didn’t get them into the boat. Gerbyshak described the muskie forage base as “unbelieveable,” with high numbers of suckers and three redhorse species.

The crew caught 93 northerns from 6.5 to 35 inches. Crappies are the main panfish species, with fish up 12.5 inches sampled. Old Abe also has strong numbers of channel catfish and a few flatheads.

Old Abe also sports a Sept. 1-30 hook-and-line lake sturgeon season that has a 60-inch size limit. A legal fish is relatively rare, but the crew found a 62-inch fish in 2009. Anglers must have a $20 sturgeon license if they wish to keep a legal fish, but anglers may also fish for sturgeon and release them as long as they have a valid fishing license.

“Harvest numbers have been pretty low; usually only one or two fish every year. But, they are in there,” he said.

“Old Abe sees light pressure compared to waters around Eau Claire and Chippewa Falls. Lake Wissota sees just a ton of recreational activity. I’d go to Old Abe instead. Try casting flies or spinners for smallies and you could catch northerns and muskies. Or go after walleyes,” he said.