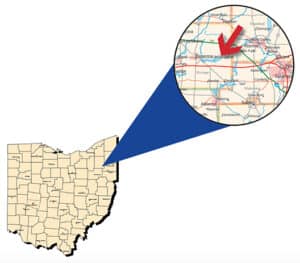 Campbellsport, Ohio — If you’ve ever wondered where the state record for striped bass came from, it’s West Branch Reservoir in Portage County, so named for the west branch of the Mahoning River that formed it.

Pure strain stripers are hard to find in Ohio inland waters, but Mark Chuifo of Ravenna found one in West Branch that tipped the scales at 37.10 pounds on July 2, 1993.

That feat might be hard to duplicate at West Branch (also known as Kirwan Reservoir) today. Stripers were stocked in 1988, but the program was quickly discontinued due to a poor forage base, which remains today, fisheries biologists say.

“The thing that’s unique about West Branch is that it is the least fertile by far of all the systems (in the Mahoning River watershed),” Phil Hillman, the late fisheries manager in northeast Ohio, once told me. “In fact, in most of the systems in Ohio, it’s common to have 100 to 200 pounds of gizzard shad per acre. In West Branch, it’s about 10 pounds per acre.”

“It’s one of the deeper lakes in (northeast Ohio),” Wolfe said recently. “Fishing depths there are anywhere from 55 to 60 feet … For anglers who fish that Mahoning Valley area, West Branch is kind of an outlier. It’s not very fertile, and it’s generally always crystal clear.”

Today, the large, 2,642-acre West Branch is perhaps best known for its muskie waters. In 2019, 600 muskies were caught by anglers. The largest was a nearly 50-inch fish. The division stocks West Branch with advanced muskie finglerlings each year.

“It’s becoming a bigger and bigger muskie fishery as the years go on,” Wolfe said. “For the longest time, Leesville (Lake) pretty much led the state for Husky Muskie catches. Leesville is still up there, but West Branch has been creeping up.”

The Division of Wildlife’s Muskie Angler Log is an invaluable tool for Ohio fisheries managers to gauge the fish population. There is no good way to sample them, so the division relies heavily on angler reports for population projections.

“There isn’t any other place I would recommend other than West Branch (for muskies),” said Curt Wagner, fish management supervisor for the division in Akron.

At certain times of the year, particularly in the fall, muskies are even accessible to shore anglers fishing off the dam. The state stocks about 2,600 muskies per year at West Branch.

“Predators are few and far between (for muskies) so they survive pretty well in there,” Wolfe said.

Walleyes are also on the state’s stocking list. Wolfe rates the walleye fishery, though, as simply average. Walleyes have been stocked every year since 2011 at a rate of at least 100 fingerlings per acre.

“Walleyes get kind of a mixed bag approach out there,” Wolfe said. “Survival isn’t great … For the longest time, we were not stocking walleyes in there. Essentially from 1989 to 2010 we were not stocking walleye in there. But, we were still getting reports of people catching walleyes. What we figured out is that walleyes were reproducing in there and surviving on their own. They were just kind of doing their own thing and surviving pretty well … It’s not exactly one of our premier walleye fisheries in that area, but it’s definitely a good one.”

There are plenty of underwater ledges and drop-offs that allow walleyes, and muskies for that matter, to find ambush areas for prey, as limited as it is here.

Both largemouth and smallmouth bass can be found at West Branch, with largemouths being in more abundance.

A bass survey in the spring of 2017 showed good numbers, Wolfe said.

“We saw good largemouth numbers, ranging from 34 fish per hour electrofishing and that was holding steady from previous years sampling,” he said.

A good area to target smallmouth here is near Rock Spring Road on the west end of the lake, an area that includes one of the four boat launches on West Branch.

In the underwater world of panfish, West Branch is much better known for its crappies than bluegills.

“People fish it fairly regularly for crappies when they come up shallow in the spring,” Wolfe said. “The whole west end floods in the spring, and those crappies really get up in there.”

Sunfish show a good size structure at West Branch, according to Wagner.

“West Branch has decent bluegills and pumpkinseeds,” he said.

With no horsepower limits at West Branch, getting out of the traffic can be a challenge. Anglers can find some bays and coves to fish west of Rock Spring Road, the entire area in which is a no-wake zone.

There are 40 miles of shoreline to find a spot along a bank to wet a line. Since West Branch Reservoir is in a state park of the same name, there are plenty of access roads that lead to water at some point. Wheelchair accessible shoreline fishing facilities are also available.

Waterfowl hunting is permitted on some parts of the lake, but check with the state park office first for legal areas.

Hikers will find an 8-mile walking trail, and there are also 20 miles of bridle trails for horseback riding enthusiasts.

“West Branch is one of those funny lakes where you can have a great, all-species day there,” Wagner said. “Nothing is terrible. But, aside from the muskies, I can’t say bass are amazing or crappies are amazing. They’re just sort of all decent.”