For thousands of years, people have possessed knot-tying knowledge. Archaelogists can’t decide if the Chinese or Egyptians did it first, but clearly you can’t create a successful civilization without some knot-tying skills.

Linda Radimecky says it’s also tough to be a successful outdoors lover without at least a basic level of knot-tying.

“There are a lot of knots, and everybody has a favorite, so it’s important to know at least five or six to use in different situations.

Radimecky is an area interpretive naturalist for the Minnesota DNR and is hosting a women’s knot-tying class out of Afton State Park for the Becoming an Outdoors Woman (BOW) program. She demonstrated some of her favorite knots when this writer visited her, and allowed me to record her knot-tying skills in action for those who need more help than this article and images (view the video via my blog at OutdoorNews.com).

If it’s still too tough to follow how to tie various knots, Radimecky said a good online resource is Animated Knots by Grog (animatedknots.com). Grog also has an smartphone app for knot-tying instruction. There are knot-tying books at the public library and plenty of websites that explain the finer points of knot-tying. For a video explaining these knots in more detail, plus a couple of bonus knots, visit Ron Hustvedt’s blog at www.outdoornews.com/minnesota

The most generic of knots, many people don’t realize that this knot is good for securing two ropes together and lengthen a line. 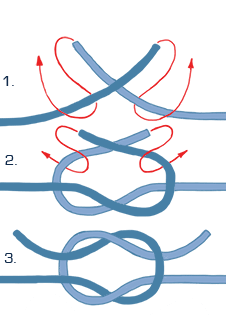 1. Begin by crossing the two lines over one another and pass the line in your right hand over the left and loop it around.

2. Then pass the left line over the right line, bring it around and tighten it up.

3. It’s a square knot if there are two interlocking loops that slip apart and can be adjusted as needed.

This is probably the most versatile knot that’s easy to make for simple tasks like creating a fixed loop for docking a boat or rescue techniques when a shoulder loop is needed that won’t squeeze the victim’s lungs as they are being pulled to safety. 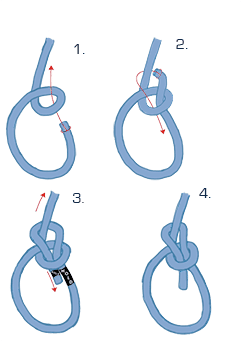 1. Begin with a loop in the rope and run the end up through the rope loop.

2. Pass the end behind the main rope and pass it back through the loop you just came through.

3. Hold the loop and end of the line and pull hard to snug it up.

4. This knot is strong, safe and easy to untie if you just flip it over and pull on the top.

A step-up to this knot, known as the Trilene knot, yields 100 percent of the line’s original strength when tested. At least that’s what the Berkley Trilene folks have determined through their testing.

1. The biggest difference is when starting the knot, you run the tag end of the line through the hook eye twice.

2. From there, pinch the loop between thumb and forefinger to hold it in place, then wrap the tag end of the line around the standing line at least five times and pass the end back through the double loop.

3. Moisten and pull. In both cases, trim off some of the excess but leave a little bit in case the knot slips a little.

For anglers this is the most commonly used knot because secures a fishing line to a lure, hook or swivel. 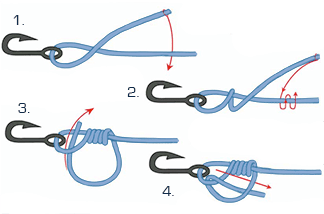 1. Tying an improved clinch knot begins by running the line through the eye of a hook or swivel and pulling through about 6 or 7 inches of line.

2. Double the line back on itself and twist it six or seven times.

3. Then pass the end of the line through the small loop formed just above the eye and then through the loop just created.

4. Moisten the line to reduce heat from friction that will damage it and pull on the end of the line until the coiled line is tight on the eye.

Radimecky said this is her go-to knot when she needs to control the level of tightness of the rope, such as tightening up a tarp. It’s an easy knot for tying off a boat but not for securing a canoe or kayak to a vehicle for high-speed or long distance travel. Technically, this knot is known as a hitch because it’s meant for securing a rope to an object.

1. Start by making a loop in the line, either around an object or just your hand.

2. Wrap the end around the center cord two times.

4. Pull on the main line as you snug the hitch into place and you’ll have a completely adjustable, secure knot.

For general outdoor use, Radimecky said paracord is her rope of choice. Pay attention to the different load strengths rope measured in including breaking strength and working load limit.

Also pay attention to the rope material. Synthetic ropes are often more inexpensive and can last a lot longer, but the cheap, shiny plastic rope is super sensitive to photo-degrading. Leave those plastic ropes in the sun for a few hours and it may turn into a brittle mess. Not all ropes are created equal when looking at natural fiber or synthetic ones, but that’s another topic for a different article.