Benezette, Pa. — Fifteen-year-old Blaze Prengaman, of Latrobe, shot a doe with his bow this fall. It was his first archery kill ever.

Usually, that would be a big deal.

This year, though, it was just the second-best part of his season.

His most amazing memory of 2017 will forever be taking a 500-plus-pound cow elk in a do-it-yourself hunt. 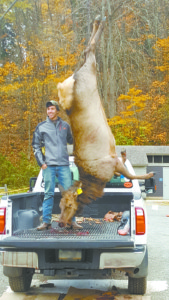 The Westmoreland County youngster drew the tag in just his second year of applying. He and his father, Jim, put their applications in together, though without much hope of actually winning.

“I thought we were just donating our $10 to a good cause,” Jim said.

Blaze not only drew a tag, though, he got it for hunt zone 2, which is close to Benezette. That’s exactly where the family has had a camp for the last nine years.

They’ve been going there even longer than that, though.

“We were going to that camp when I was pregnant with Blaze,” said his mother Renie.

Jim originally called a few outfitters, thinking he might hire a guide for the hunt. Even with the discounts a couple offered for leading a youngster, though, that was shaping up to be pretty expensive, he noted.

At the same time, Blaze said that he might actually prefer a do-it-yourself experience.

So that’s what they set out to do.

From the time of the drawing onward, they made a lot of scouting trips to the area. Jim in particular walked a lot of miles looking for elk.

He felt he had to.

Family and friends kept stressing to him what an opportunity this was for Blaze. They told him he had to make this happen.

“I was sweating it pretty bad there for a while,” Jim said.

They drove to camp in time to hunt turkeys and scout for elk on the Saturday before opening day of elk season. They came across some elk that day, so Blaze was pretty excited.

But not so excited he’d settle for just any elk.

That became clear on opening day.

He and his father and a few helpers set up on a cliff-like bluff overlooking a food plot. It filled up with elk not long after daylight – but the herd, about 15 elk in all, was made up entirely of spike bulls.

They watched them for a while, hoping a cow might come along. None did.

The sighting allowed Blaze to settle down, though.

“I was pretty nervous the first hour or so. But after that I was OK,” he said.

“All the nervousness went right out of you,” Jim agreed.

They eventually moved, coming upon some of those spikes again.

“They were so calm,” Blaze said. “We saw some deer and when they spotted us, from a couple hundred yards off, they were gone. But we walked to within 40 yards of those spikes.”

Later that afternoon they returned to almost the same spot they’d been in during the morning. This time, some cows did show up.

Jim was standing behind Blaze with a few others. They saw the cows, too. But Blaze wasn’t shooting.

“I walked up to him and asked if he saw the elk and what he was going to do,” Jim said.

“I was like no, I wasn’t shooting a small one,” Blaze said.

“When I walked back, one of my buddies asked what Blaze had said. I told him and he asked me if I’d have shot one of those elk,” Jim said.

Blaze waited, though, and on day two that patience paid off. Watching the same food plot, from a spot about 100 yards away from where he was on Monday, two much larger cows showed up.

His cow weighed 403 pounds when he got it to the check station. Biologists estimated its live weight at 525 pounds.

That put it in some special company. Hunters killed 79 cow elk during Pennsylvania’s 2017 season. Just nine of them, though, counting Blaze’s animal, topped 500 pounds.

It was a thrilling experience, Blaze said. And one he, in some ways, always expected to have

“I always said I was going to kill an elk up there,” he added.