With hundreds of thousands of visitors every year, Mackinac Island has long been one of Michigan’s favorite vacation destinations.

The island is known for its scenic views – often seen from a bicycle – historic attractions, fudge and horses, but until recently, many visitors did not know about its connection to Native American history and culture.

“Mackinac Island has a long and rich Native American story that begins centuries before European exploration and continues through today, but this story and its impact on Mackinac history were not effectively communicated to island visitors,” said Phil Porter, director of Mackinac State Historic Parks, the agency that oversees Mackinac Island State Park.

The Mackinac Island State Park Commission, in partnership with the Little Traverse Bay Band of Odawa Indians, came up with the idea to the share this rich history through a series of interpretive stations on Lakeshore Boulevard (M-185), the road around the perimeter of Mackinac Island.

“This location is ideal, as it provides a picturesque and appropriate setting between the waters of Lake Huron and the woods of Mackinac and is used by hundreds of thousands of island visitors every summer,” Porter said.

“One of our major areas of emphasis is education, and assisting residents and visitors better unde 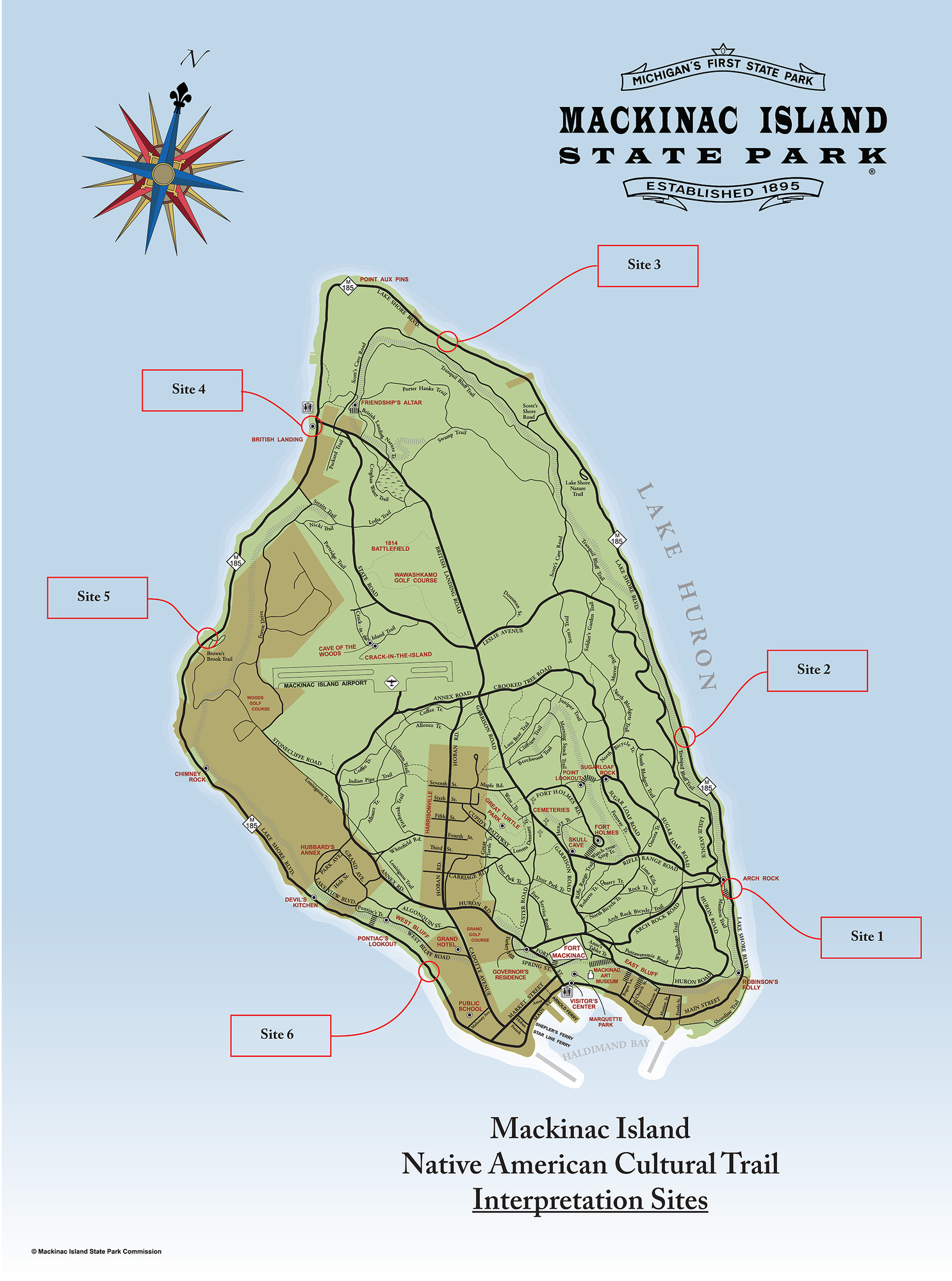 rstand the historic value of Native American activity in the upper Great Lakes and around the country fits in with that mission,” said Peter Pellerito, president of Mackinac Associates. “Or board was very supportive of this proposal when it was brought to them. It’s an eminently desirable thing to support.”

Many others agreed and jumped on board to back the project as well, with Mackinac Associates exceeding its fundraising goal.

Pellerito said that contributions came from around Michigan and elsewhere, which is emblematic of the widespread interest in the Native American perspective and impact on the Straits area.

“You don’t have to be from Mackinaw City to understand and appreciate the Native American contribution to our part of the world and beyond.”

Eric Hemenway, director of Archives and Records for the Little Traverse Bay Band of Odawa Indians, drafted the language for the interpretive panels, installed in summer 2016, along what is now called the Native American Cultural History Trail.

“The working relationship between Little Traverse Bay Band Odawa Archives and Mackinac State Historic Parks has spanned nearly a decade,” Hemenway said. “We have worked together on numerous other projects centered around telling the diverse story of the Straits of Mackinac.

“The work always was one of mutual respect and wanting to give the visitor to the Straits area the best possible experience. Part of enhancing that experience was realizing that Mackinac Island could use more interpretation of the Anishnaabek (Odawa, Ojibway and Potawatomi) story to the island.”

Out of that collaboration between the two organizations came six signs telling different stories of Native Americans at the Straits of Mackinac. The six themes the interpretive panels cover include:

The six interpretive panels were placed at stopping points along Lake Huron and incorporated into resting stations with benches and bicycle parking.

“Biking around the perimeter of the island is a popular activity, but with three-quarters of a million people or more coming to the island every year, it can get congested when visitors stop to take photos or admire the scenery,” said Porter. “Hopefully the convenience of these bike parking areas will decrease some of that congestion while simultaneously offering an important educational experience.”

The panels and areas surrounding them were designed to blend with the natural surroundings, utilizing locally familiar products like cedar and limestone, so as to not be obtrusive to the island’s natural beauty. 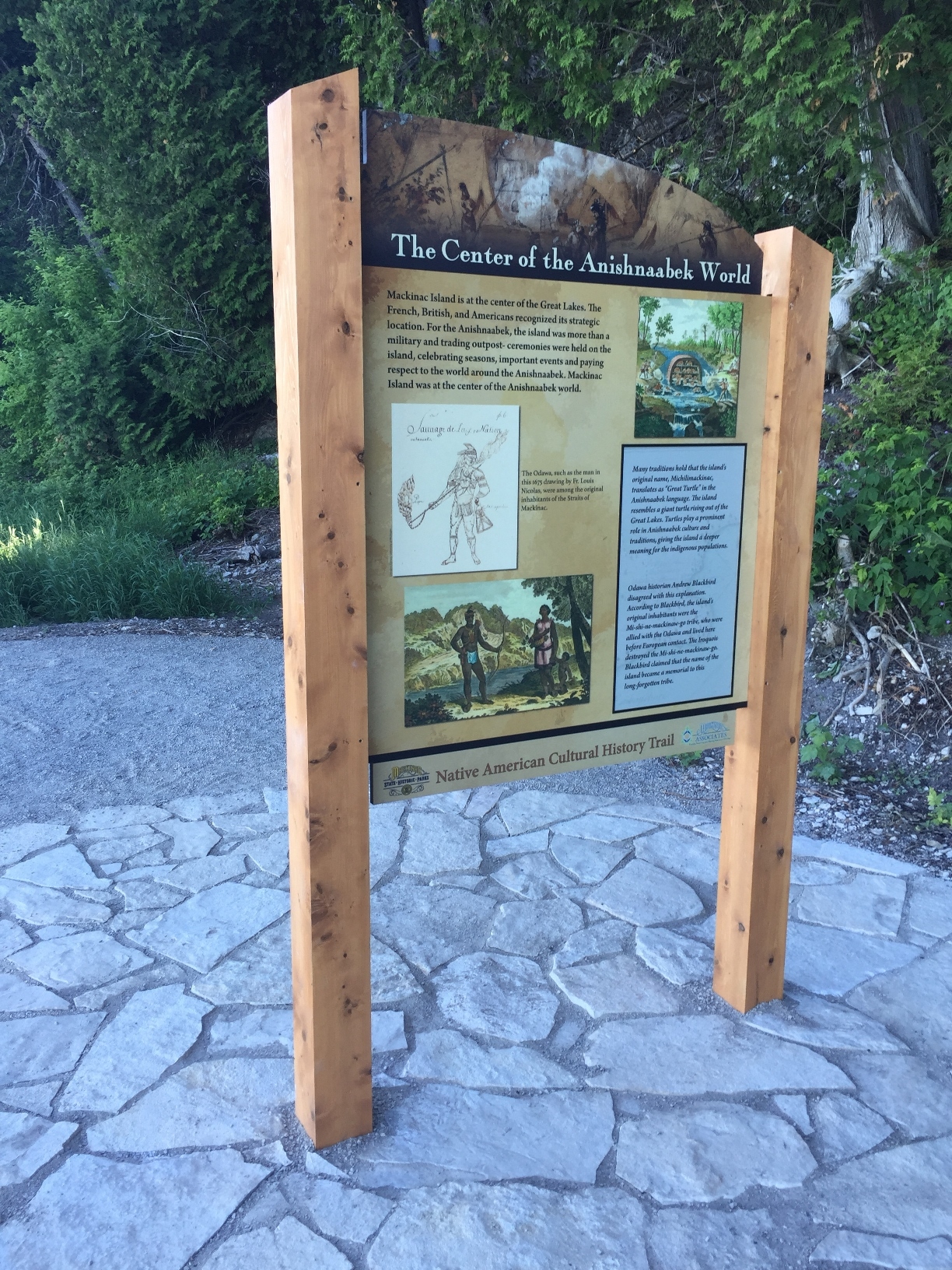 “I feel very honored to have been able to design a site like this that interprets such important and often under-represented information in such a holistic way,” said Mackinac State Historic Parks exhibit designer Keeney Swearer. “So often when creating trailside panels, there is only room to talk about a few subjects that often don’t give readers the larger context to the story.

“Since we had so much room we were able to spread the information out and deliver it to the visitors in a more deliberate way, hopefully introducing them to some of these larger concepts.”

Swearer added that the large panels also allowed the development team to present a wide variety of images, from early sketches and prints to modern photographs, most of which had not been used at Mackinac State Historic Parks before.

“I believe that to present this information to such a large and diverse audience is certainly a special thing,” he said.

Others who worked together to bring the Native American Cultural History Trail to fruition would agree.

“We were thrilled to see such terrific support for this worthwhile project,” said Porter. “This formalized interpretation of centuries of Native American culture on Mackinac Island will go a long way in promoting both enjoyment and understanding of the island’s rich history.”

Mackinac State Historic Parks, an agency within the Michigan Department of Natural Resources, protects, preserves and presents Mackinac’s rich historic and natural resources to provide outstanding educational and recreational experiences for the public.

A Year's Subscription starts at
$25
per year
Subscribe/Renew Today!
Give a Gift

An appalling proposal from the Pennsylvania Game Commission

Why and when do whitetail bucks shed their antlers?

In New York, making a point – and losing one – on new state record buck