Ice fishing anglers all over the northern sections of Illinois eagerly await the start of ice fishing season each year. With the limited amount of time there is each season to fish (especially this year), ice fishermen are always looking for the best ways to catch more, and bigger, fish.

The hottest thing going the past few years with ice fishing is the use of live sonar.

Live sonar is a newer system of being able to view, in real time, what’s under water. It’s a rough form of almost seeing the action on a TV screen.

With live sonar you can see your lure enter the water, and the fish swim toward or away from your offering. By actually being able to see the action, you can deviate your presentation to help you catch more and larger fish. By reading how the fish are stationed or moving, it can tell you if you should stay in that area or try another hole. 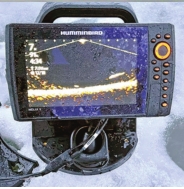 Broshadl credits live sonar for his success on everything from walleyes (r) to crappies, bluegills, and perch. His unit of choice is the Mega Live system made by Humminbird (above). Photos provided

The late, great, structure fisherman, Buck Perry, always commented that “knowledge was the key to success.” Today, with outdoor newspapers, magazines, the Internet, and TV, it’s easy to pick up information from avid anglers who are willing to disclose their secrets.

I recently had the opportunity to interview one of the most well-known and talented ice anglers in North America, Brian “Bro” Broshadl. Broshadl, a member of Humminbird’s national pro staff, disclosed some of the live sonar fishing secrets he has discovered over the past few years. 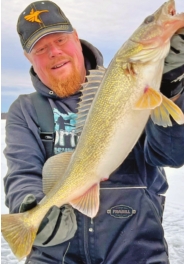 Broshadl: “I have an ice Helix 9 G4 N Mega Live. It comes as an ice bundle with a down rod and handle that allows you to turn and view the landscape around you. The 9-inch screen is perfect on the ice as it allows you to see it from a distance. Plus, it has mapping, a built-in Humminbird base map plus it accepts Lakemaster Maps. These have high detailed surveyed maps of lakes. It also has AutoChart Live ice.

You can also use this unit in open water. It is a portable 9-inch sonar face with a 20-amp lithium battery, extra USB ports to plug in a cell phone or lights, two rod holders and a large handle on the shuttle case to pick up and move.

Fiorille: How long have you used it?

Broshadl: Two seasons. It is amazing to look in the distance and see fish in real time swimming up to your bait. It is like an ultrasound for fish. I can drill a line of holes in a fish shelter and see everyone’s lures and watch the fish strike the lure.

Fiorille: What has it taught you about crappies?

Broshadl: On some lakes crappies don’t relate to weedlines, drop offs or brush. They are sitting suspended over open lake basin. Fish like this would be extremely hard to find without live sonar. Simply drill holes, scattered in the basin, drop the down rod and spin until you see the fish on the screen. Mark and drill holes above them. Bring the drop-down transducer down rod. Then you can watch the crappies swim in real time play cat-and-mouse until they hit the bait.

Fiorille: What has it taught you about bluegills?

Broshadl: Bluegills will sometimes be in open basins but most of the time on the edge on an old weed bed, brush or rocks. I think they are hiding from bass and other predators.

Broshadl: Perch, will roam flats and on some lakes that can mean 10 square miles. This helps me find perch swimming through short weed growth clam beds and muddy basins. But they are restless, unlike crappies and bluegills that hold to an area. Perch tend to swim and are super aggressive when forage drops in. At other times they will swim up to a lure, bump it, and swim away.

Fiorille: How has live sonar altered or improved your fishing? Has it caused you to change your lures?

Broshadl: It tells me the mood of the fish immediately and whether or not to offer them a spoon, a jig, or a live bait rig. I switch tactics and lures based on the action or mood of the fish as they approach my lure.

Fiorille: Have you found fish can be conditioned to it?

Broshadl: No, I don’t think so. I think fish are conditioned to boat traffic, lures, and weather conditions.

So, if you want the latest piece of fishing equipment to help improve your ice fishing catches, live sonar is available.

Broshadl, recommends using it. Knowing he is a guide, accomplished tournament angler, and avid fisherman, it pays to listen.