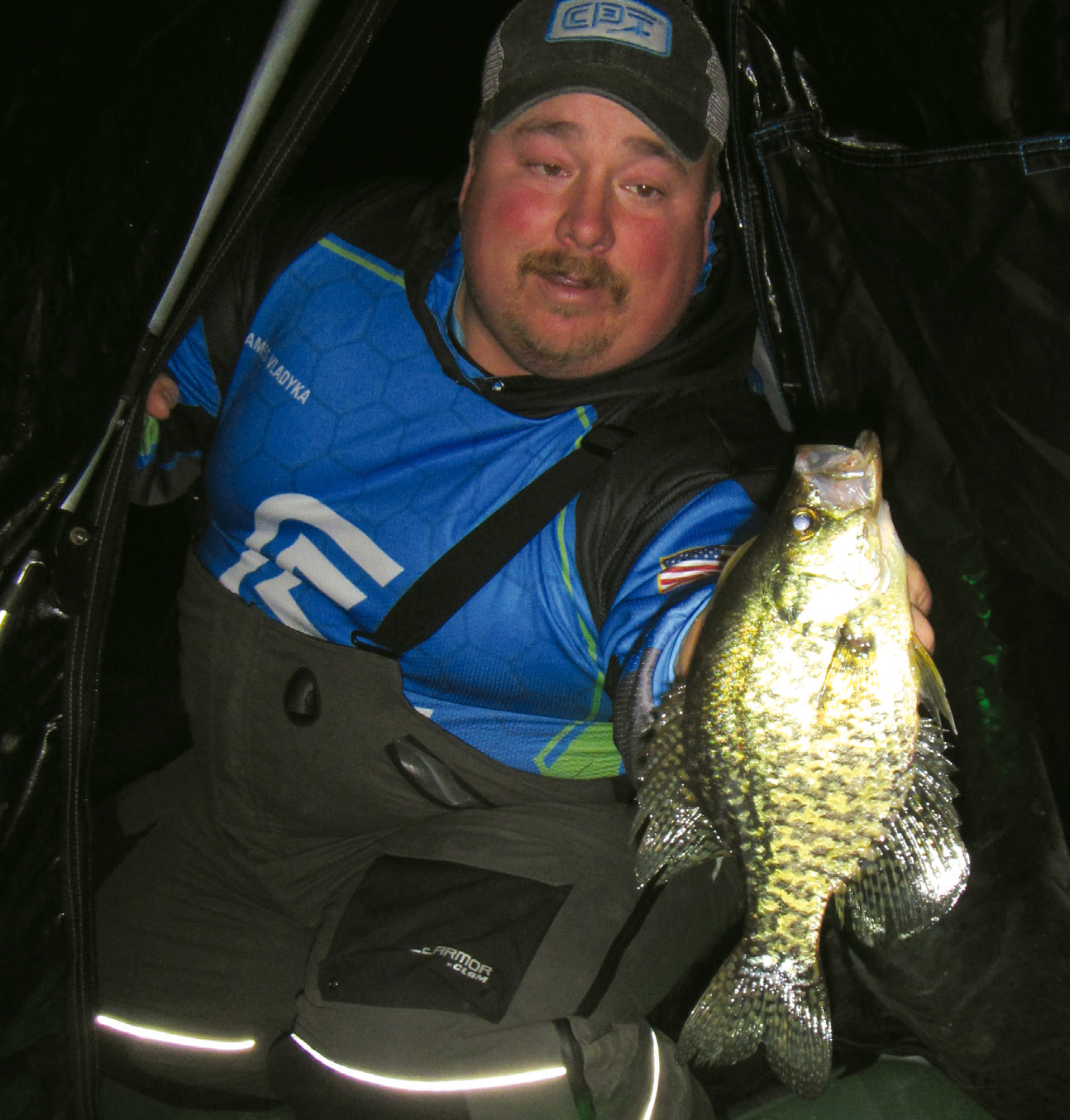 Attardo seeks out big crappies, like this one, in deep water at night. Photo by Vic Attardo

For whatever reason, I’ve grown to like the night for a lot of my ice fishing. The fish that gives me the most satisfaction with night fishing is the ubiquitous crappie, either white or black. Ice crappies are always a challenge, but I’ve been prosperously working on the night mystery for many seasons.

In the daylight, bluegills and bass are as common as flapjacks at IHOP, but if you really want to catch ice crappies, you need to fish “the magic hours” between 4 and 5 p.m., or 5 to 6 p.m. – depending on the month – then also at night, especially with a bright moon.

As I trudged across a 40-acre lake on one particular outing, I went directly to the middle of the lake, the deepest water between 16 and 19 feet.

For ice crappies on small lakes, I often start at the deepest water, with no real concern about weedbeds or edges or anything like that. I’m looking for the biggest battleship crappies in the lake, so I don’t want the schools with smaller fish, probably in shallower water.

I think the battleships are in pods of three or four fish, and they’re slowly cruising around looking for whatever swims into this limited area of deeper water. When they appear on my flasher, they seem to move in and out quickly, but given time they also come back (if I’m lucky).

Right away, you have to ask yourself if there is going to be any difference between the way you fish in daylight or at night? I believe the answer is “yes,” but I don’t go overboard with the changes.

If I’m not using an underwater light to attract bait etc. – and often when I am – then I’ll likely use a glow spoon, the tiny tear-drop design, again in glow colors. This spoon has only a single hook fused to the body, not a hanging treble hook. I’ll also attach a small fathead minnow on the spoon, not a wide-body shiner as the hook is too small for such a bait.

If I’m seeing crappies in the area but they’re not interested in coming near my bait, I switch to a treble-hook spoon with a rattle, and also a rattle-infused ripping-rap style hard body lure. It’s important to use the lift-style retrieve when working any of these offerings. You begin by plopping the bait on the soft bottom to raise a small cloud of muck and marl. On the sonar when a fish comes to your bait without striking, slowly lift the lure, mildly shaking the rod.

This trick often mesmerizes the crappies to follow the bait up through the water column and then strike. Don’t overdo the lift; do it slowly as you watch the crappies come up to the bait. In all, you’re raising the bait 2- to 4-feet at most from the bottom, so once you’ve got it 6 or more feet up, you’ve probably lost the crappie’s attention. At that point, give it a slow fall. But if the crappie is still on the screen, don’t chase the fish down with the lure. What prey turns around and chases the predator?

Now another little thing you might want to try, especially where there’s oodles of tiny perch, is to fish your crappie bait several feet off the bottom; 3- to 5-feet is a nice average. That placement tends to discourage the small perch as they’re likely to be attacked by crappies, and bass, as they expose themselves swimming higher in the water column. The higher placement doesn’t discourage the crappies at all.

If the single hook on your lure can handle a piece of fresh dead minnow, then add a chunk. Also, adding the head with the eyes to a bottom treble often results in the crappie attacking that part of the offering, as they typically hit a bait head-first.

I keep something soft – a piece of foam, a towel, something – that I can place the fragile light on without fear of breakage. I like to get the hooked crappie several feet off the bottom before reaching out for the obstructions.

It’s the whole ballet of hooking, reeling and lifting a crappie up from a dark hole, light or no light, that makes night crappie fishing so special.